Jayant Vishnu Narlikar is an Indian astrophysicist. Narlikar is a proponent of steady state cosmology and is known internationally for his work in cosmology.  With Sir Fred Hoyle developed the conformal gravity theory, commonly known as Hoyle–Narlikar theory. 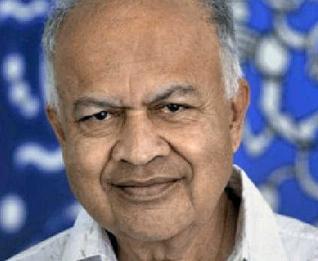 Jayant Vishnu Narlikar was born in Kolhapur on July 19, 1938 in a family of Karhade Brahmin scholars to Vishnu Vasudev Narlikar and Sumati Narlikar. Jayant completed his class 12th from Kendriya Vidyalaya Banaras and his Bachelor of Science degree from Banaras Hindu University in 1957.
He then began his studies at Fitzwilliam House, Cambridge University in England, where he received a BA in mathematics in 1959 and was Senior Wrangler. He received his Ph.D. in 1963 under the guidance of Fred Hoyle.
He served as a Berry Ramsey Fellow at King's College in Cambridge and earned an M.A. in astronomy and astrophysics in 1964. Narlikar took up Professorship at the Tata Institute of Fundamental Research in Mumbai, in 1972.
In 1988 the Indian University Grants Commission set up the Inter-University Centre for Astronomy and Astrophysics in Pune and Narlikar became its Founder-Director. Narlikar married a mathematics researcher and professor Mangala Rajwade. The couple have three daughters.

Jayant Narlikar is known internationally for his work in cosmology and especially in championing models alternative to the popular Big Bang model. He was the President of the Cosmology Commission of the International Astronomical Union during 1994-to 1997.
His research work has involved Mach’s Principle, quantum cosmology, and action-at-a-distance physics. Jayant Narlikar With Sir Fred Hoyle developed the conformal gravity theory, commonly known as Hoyle–Narlikar theory.
It synthesizes Albert Einstein’s Theory of Relativity and Mach's Principle. The theory proposes that the inertial mass of a particle is a function of the masses of all other particles, multiplied by a coupling constant, which is a function of the cosmic epoch. In cosmologies based on this theory, the gravitational constant G decreases strongly with time.

Narlikar headed an international team in a pioneering experiment designed to sample air for microorganisms in the atmosphere at heights of up to 41 km during 1999-2003.
Biological studies of the collected samples led to the findings of live cells and bacteria which introduced the possibility that the earth is being bombarded by microorganisms, some of which might have seeded life itself on earth.

Narlikar has written scientific papers, books, popular science literature, science fiction, novels and short stories in English, Hindi and Marathi. Narlikar is also the consultant for the Science and Mathematics textbooks of NCERT.

Jayant Narlikar has received many awards for his contribution towards science. Notable amongst them are the Padma Vibhushan in 2004 and Padma Bhushan in 1965.
He received Maharashtra Bhushan Purskar in 2010. He has also received Bhatnagar Award, MP Birla Award and the Prix Jules Janssen of the French Astronomical Society. In 1996 the UNESCO awarded him with the Kalinga Award.
7730