Srinivasa Ramanujan was an eminent Indian mathematician and autodidact. Ramanujan's name shines brightly in the field of mathematics as he made extraordinary contributions to mathematical analysis, number theory, infinite series, and continued fractions. 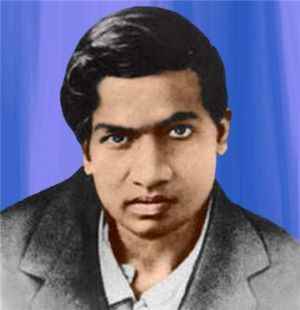 Ramanujan was born on 22 December 1887 at Erode, Madras in a Tamil Brahmin family of Thenkalai Iyengar sect to  K. Srinivasa Iyengar, and Komalatammal. Ramanujan's introduction to formal mathematics began at the age of 10.
He demonstrated unusual mathematical skills at school. At the age of 12 he mastered advanced trigonometry. He even discovered theorems of his own and re-discovered Euler's identity independently. By the age of 17 Ramanujan had conducted his own mathematical research on Bernoulli numbers and the Euler–Mascheroni constant.
On 14 July 1909 Ramanujan married Janakiammal. In 1912–1913, he sent samples of his theorems to three academics at the University of Cambridge. Recognizing the brilliance of his work, G. H. Hardy invited Ramanujan to visit and work with him at Cambridge.
Ramanujan was awarded a Bachelor of Science degree by research (the degree was later renamed PhD) in March 1916 for his work on highly composite numbers.
On 6 December 1917 he was elected to the London Mathematical Society. He became a Fellow of the Royal Society in 1918 and On 13 October 1918 he became the first Indian to be elected a Fellow of Trinity College, Cambridge. Gradually as Ramanujan's health worsened in England he returned to India in 1919. He died of illness in 1920 at the age of 32.

The celebrated Mathmatician Srinivasa Ramanujan had almost no formal training in pure mathematics. Living in India with no access to the larger mathematical community, which was centred in Europe at the time, Ramanujan developed his own mathematical research in isolation.
He rediscovered known theorems in addition to producing new work. According to English mathematician G. H. Hardy Ramanujan was a natural genius in the same league as mathematicians Euler and Gauss.

Ramanujan independently compiled nearly 3900 results, mostly identities and equations. Nearly all his claims have now been proven correct. The results that he stated were both original and highly unconventional such as the Ramanujan prime and the Ramanujan theta function.
These results have inspired a vast amount of further research. other contributions of Ramanujan was the discovery of Ramanujan's ternary quadratic form, Ramanujan summation, Ramanujan graph, and Rank of a partition.