Subrahmanyan Chandrasekhar was one of the greatest scientists of India. He was an Indian-American astrophysicist. Chandrasekhar, with William A.  Fowler, was awarded the 1983 Nobel Prize for Physics for his mathematical theory of black holes, which was a key discovery that led to the currently accepted theory on the later evolutionary stages of massive stars.
The Chandrasekhar limit is named after this greatest scientist. 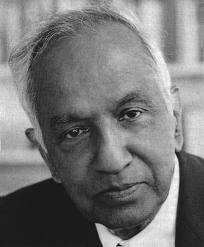 He worked in various areas in science, including theory of white dwarfs, stellar structure, stellar dynamics, theory of radiative transfer, hydrodynamic and hydromagnetic stability, quantum theory of the negative ion of Hydrogen, general relativity, equilibrium and the stability of ellipsoidal figures of equilibrium, mathematical theory of black holes and theory of colliding gravitational waves.

Chandrasekhar was recruited to the University of Chicago as Assistant Professor in January 1937. He remained at the university for his entire career. During World War II, Chandrasekhar worked at the Ballistic Research Laboratories at the Aberdeen Proving Ground in Maryland. From 1952 to 1971 Chandrasekhar was editor of The Astrophysical Journal.

Chandrasekhar's most notable work was the astrophysical Chandrasekhar limit. At the Cambridge University he developed a theoretical model explaining the structure of white dwarf stars that took into account the relativistic variation of mass with the velocities of electrons that comprise their degenerate matter.
Chandrasekhar showed that the mass of a white dwarf could not exceed 1.44 times that of the Sun which forms the Chandrasekhar limit. He was awarded the Nobel Prize in Physics in 1983 for his studies on the physical processes important to the structure and evolution of stars.


Awards and honours of Chandrasekhar