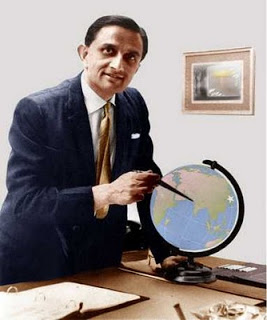 Vikram Sarabhai was born on 12 August 1919 in Ahmedabad, Gujarat to Ambalal Sarabhai and Sarla Devi. His father was an affluent industrialist of Gujarat. Sarabhai matriculated from the Gujarat College in Ahmedabad.
moved to England and joined the St John's College, University of Cambridge. Sarabhai received the Tripos in Natural Sciences from Cambridge in 1940.  After returning to India in 1947 Sarabhai persuaded charitable trusts controlled by his family and friends to endow a research institution near his home in Ahmedabad looking at the needs of the people.
This led to the creation of the Physical Research Laboratory in Ahmedabad on November 11, 1947. Vikram Sarabhai married Mrinalini Sarabhai, a celebrated classical dancer in  1942.
The couple had two children-Kartikeya and Mallika. Mallika Sarabhai is a celebrated Indian classical dancer. Vikram Sarabhai died on 30 December 1971 at Halcyon Castle, Kovalam, Kerala.

Vikram Sarabhai was an eminent scientist of India. He carried out many successful works in the field of science and research in India. Sarabhai always thought that space programme was one of the greatest achievements of mankind and therefore worked for the progress of space programmes in India.
The establishment of the Indian Space Research Organization was one of his greatest achievements. He successfully convinced the government of the importance of a space programme for India. Dr. Homi Jehangir Bhabha, the father of India's nuclear science program, supported Dr Sarabhai in setting up the first rocket launching station in India.
The center was established at Thumba near Thiruvananthapuram on the coast of the Arabian Sea, mainly because of its proximity to the equator. After a remarkable effort in setting up the infrastructure, communication links, launch pads and personnel, the inaugural flight was launched on November.

21, 1963 with a sodium vapour payload. Due to Dr Sarabhai's dialogue with NASA in 1966, the Satellite Instructional Television Experiment was launched during July 1975 – July 1976.
Dr Sarabhai started a project for the fabrication and launch of an Indian satellite. Due to this the first Indian satellite Aryabhata was put in orbit in 1975 from a Russian Cosmodrome.

Vikram Sarabhai was very interested in science education and founded a Community Science Centre at Ahmedabad in 1966 which is called the Vikram A Sarabhai Community Science Centre. Dr Sarabhai established many institutes which are of international repute.
Notable among them are the Nehru Foundation for Development in Ahmedabad, Indian Institute of Management Ahmedabad, Physical Research Laboratory, Ahmedabad Textiles Industrial Research Association, Center for Environmental Planning and Technology, Operations Research Grup, Faster Breeder Test Reactor in Kalpakkam, Variable Energy Cyclotron Project in Calcutta, Electronics Corporation of India Limited, in Hyderabad and Uranium Corporation of India Limited in Jharkhand.


Awards and honours of Vikram Sarabhai