Angaraag Mahanta who is popularly known as Papon is a well known singer, composer and record producer from Assam.  Angaraag Mahanta is known to conduct innovative experiments on his work and making a fusion of traditional and folk music styles. 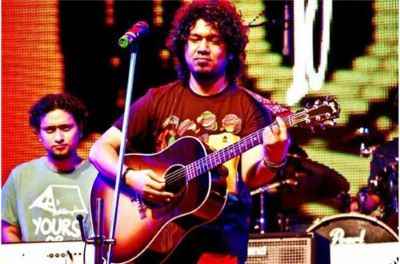 He was born in a musical family to music duo and legends of Assamese music, Khagen Mahanta and Archana Mahanta. Hailing from the music family, he was introduced to music from a very small age. As such, his inclination to music happened from a very small age.
He is also accustomed to playing the guitar, khol, tabla and harmonium. His musical style includes ambient electronic, acoustic folk and new age Indian classical music.
There are also traces of pentatonic Mongoloid notes, river song influences and ghazals seen in his singing style. Angaraag Mahanta conducts innovative experiments on his work and sings mixing electronic elements in traditional and folk music styles.

Papon released his first album ‘Jonaki Raati’ in Assamese in the year 2004. In this album, all the eight songs are fresh both in content and rendition. Angaraag Mahanta has very beautifully touched the essence of the meaningful lyrics however, by not letting the music overpower the lyrical essence.
The second album was ‘Sinaaki Osinaaki’ released in November 2009. Angaraag has also sung in few albums produced by various artists. Subsequently after his second album, he released his first folk music album Rangphul, a Bihu album after which he produced Gomseng and Phagunor Gaan subsequently. Phagunor Gaan is an album representing the typical Holi songs of Barpeta in West Assam.
They have also performed in the Eastwind festival, Kovalam Literary Festival and overseas with Sutasi in Singapore. They also performed at the October Fest in Bangalore, NH7 Weekender Fest in Pune and the Rock for Rights concert in New Delhi.
Earlier their track OMO was taken on by Saregama HMV for release on a compilation album, The Underground, along with a song called ‘Jiya Baitho Jai’ in an album called Sahibol. In the year 2008, their track called Khuda Hota was released by Dada Music, an extension of Music Today.


Awards and Nominations of Papon: