Asha Bhosle is a popular Indian playback singer. The golden and melodious voice that she has, Asha Bhosle is one of the most versatile singers of the Hindi film industry. 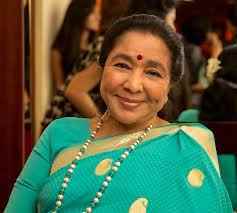 Her career spanned over six decades and she has done playback singing for over a thousand Bollywood movies, private albums and participated in numerous solo concerts in India and abroad.
The World Records Academy recognised her as the 'Most Recorded Artist in the world. The Guinness Book of World Records officially acknowledged her as the most recorded artist in music history.
The Government of India has honoured her with the Dadasaheb Phalke Award and the Padma Vibhushan for her contribution to Indian music.

Asha Bhosle was born on 8 September 1933 in Sangli, Maharashtra, into the musical family of Master Deenanath Mangeshkar. Asha got her training in Indian classical music at a very young age from her father.
She also underwent the 'gatha bandan' ceremony with Hindustani classical music maestro Ali Akbar Khan to learn a classical repertoire held within the Maihar gharana. 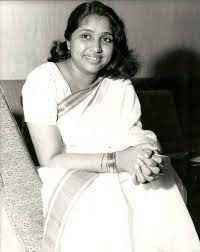 She is the sister of renowned singer Lata Mangeshkar. After the death of her father she and Lata Mangeshkar began singing and acting in films to support their family. She acted in a few films as a child artist.
Success did not come to Asha overnight as she had to struggle in her singing career as Lata Mangeshkar had gained much popularity then as playback singer.
Nevertheless Asha never gave up and found her her inner talent which was different from singers of her times and with that came out a versatile singer whom the world knows as Asha Bhosle now.
Asha first married Ganpatrao Bhosle with whom she has three children. She married RD Burman in 1980. Presently she lives in Mumbai.

Asha Bhosle is one of the most popular Indian playback singers. She is a legendary singer who has sung in several Indian languages. Asha has sung in many blockbusters of the golden era most of which are musical hits.
Along with her solo performances Asha has also sung duets with Kishore Kumar, Mohd Rafi and Mukesh which remain the chartbusters of all time. Asha's name is synonymous with versatility.
Her voice suits every genre of singing, be it Hindi film songs, ghazals, bhajan, Indian classical music, pop, or folk songs, or be it any Hindi film actor Asha Bhosle gave soul to every songs that she lent her voice to. 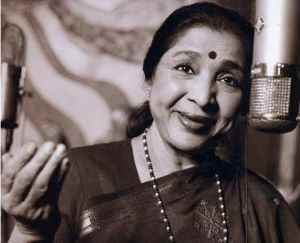 Asha sang her first film song 'Chala Chala Nav Bala' for Marathi film 'Majha Bal' in 1943. She made her Hindi film debut for the song 'Saawan Aaya' for the film 'Chunariya' in 1948.
Her first solo Hindi film song was for 'Raat Ki Raani' in 1949. She tasted huge success with the movie Naya Daur in 1957.


Awards and honours of Asha Bhosle

Asha Bhsole has won several awards and recognition for her contribution to Indian music. Asha Bhosle has won seven Filmfare Best Female Playback Awards. Asha has won the National Film Award for Best Female Playback Singer twice.
She has received seventeen Maharashtra State Awards. In 1997 Asha became the first Indian singer to be nominated for the Grammy Award for 'Legacy', an album with Ustad Ali Akbar Khan. In 2000 she received the Dadasaheb Phalke Award for her outstanding contribution to Indian cinema.
The Government of India honoured her with the Padma Vibhushan in 2008. In 2011 the Guinness Book of World Records officially acknowledged Asha as the most recorded artist in the history of music.
1295