Begum Akhtar (1914-1974) was an Indian ghazal, dadra and thumri singer. She immortalized her own style of singing that has been unmatched by anyone in the field of ghazals.
She is known as the Mallika-e-ghazal. She is synonymous with the concept of “ghazal gayaki”. She has nearly 400 songs to her credit.  She notably composed her and her own songs, ghazals and most of her compositions were primarily raga based. 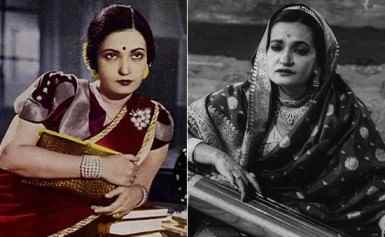 She acted in a few Hindi movies in the 1930s. She sang all the songs of her movies. In Satyajit Ray’s film “Jalsaghar” she played the role of a classical singer.

Akhtari Bai Faizabadi or Begum Akhtar was born on October 7, 1914 in Bada Darwaza in Faizabad district in Uttar Pradesh. She was born in a high class family that was not musically inclined. Her father Asghar Hussain was a lawyer.
Begam Akhtar was influenced by the music of Chandra Bai when she was seven years old. Her family was not musically inclined. She was sent to be trained under Ustad Imdad Khan, the Sarangi exponent and later under Ata Mohammad Khan of Patiala.
In Calcutta she learnt classical music from Mohammad Khan, Abdul Waheed Khan of Lahore and Ustad Jhande Khan.

She was married to Ishtiaq Ahmed Abbasi in 1945. She stopped singing for 5 years after her marriage because her husband would not allow her. She died on October 30, 1974. 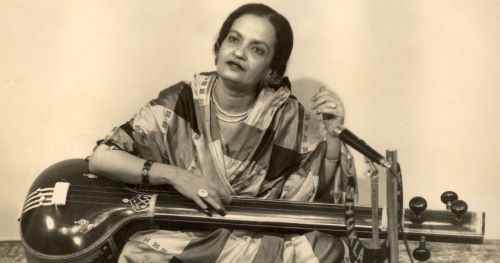 The voice of Begum Akhtar was mature, rich and deep. She sang ghazal, thumri, dadra and other light classical pieces in her inimitable style. She has nearly 400 songs to her credit.
She was a regular performer at the All India Radio. She notably composed her and her own songs, ghazals and most of her compositions were primarily raga based.

Her supreme artistry lied in light classical music. She chose her repertoire in primarily classical modes. Her songs varied from various ragas ranging from simple to complex. She gave her first performance at the age of 15. Her performance was appreciated by Sarojini Naidu during a concert.
She cut her first disc for the Megaphone Record Company. Her ghazals, thumri and dadra were released in a number of gramophones records.

After her marriage she was forbade by her husband to continue singing. She stopped singing for almost 5 years. She fell ill as a consequence. She was prescribed to sing to regain her health.
She subsequently returned to singing in 1949. After her return to the singing world she never stopped.
She also lent her voice for the Hindi movies “Daana pani”, “Ehsan”.

Begam Akhtar was an extremely beautiful woman whose beauty took her to the film industry. She acted in a few Hindi movies in the 1930s. It is to be noted that she sang all the songs of her movies. She acted in the film “Roti” released in 1942.
The film consisted six of her ghazals but due to some circumstabnces 3-4 ghazals were deleted from the film. She acted in the films like “Ameena”, “Mumtaz Begum”, “and Jawani ka nasha”, “Naseeb ka chhakkar”. In Satyajit Ray’s “Jalsaghar” she played the role of a classical singer.

During her last concert in Balaramapuram near Thiruvananthapuram in 1974, she raised the pitch of her voice as she felt that her singing had not been as good as she had wanted it to be and felt unwell.
She died on 30 October 1974 in the arms of Nilam Gamadia, her friend, who invited her to Ahmedabad, which became her final performance.


Awards and Recognitions of Begum Akhtar:

Begam Akhtar was given the title Mallika-e-ghazal.She was the recipient of the Sangeet Natak Academy award for vocal music in 1972. The government of India awarded her the Padma Shri in 1968 and the Padma Bhushan in 1975.
2418