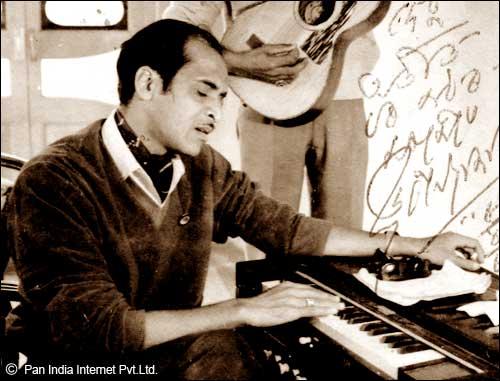 Jayanta Hazarika was one of the most prominent personalities of Assamese music fraternity.
He was considered as one of the melodious singer and composer in Assamese music world.
During his life span, he composed for a numerous films and performed over many songs.
Jayanta Hazarika is the pioneer behind introducing several western musical instruments in his songs.
His songs continue to mesmerize and enchant the people till date with his soulful lyrics and enchanting melody. He is the first Assamese singer who focused the urban youth with his music.

Jayanta Hazarika was born on 20th September 1943 to the culturally inclined Hazarika family. He was the youngest of six children of Nilakanta Hazarika and Shantipriya Hazarika. He was the youngest brother of musical prodigy and great cultural icon of Assam, Dr. Bhupen Hazarika.
Jayanta Hazarika died prematurely on 15th October 1977 and left behind his wife and son. His wife, Manisha Hazarika, though raised in a musical ambiance family in Kolkata decided to stay back in Assam to carry on her husband’s legacy.

Jayanta Hazarika was an eminent singer and composer. His integration of Western notes into indigenous Assamese tunes has made him the archetype of a progressive Assamese musician. He was an expert in playing a host of instruments including the guitar, mandolin, accordion, tabla and mouth organ among others.
Jayanta Hazarika assisted his elder brother Dr. Bhupen Hazarika in composing and directing music for a number of Assamese films. He composed he first tune in his life at the age of nine for lyrics written by one of his elder brother’s Nripen Hazarika.
His venture into playback singing started in 1963 in the Assamese feature film Maniram Dewan where his brother, Dr. Bhupen Hazarika was the music director. He went on to sing numerous melodious songs for films like Lotighoti, Chikmik Bijulee, Faguni etc.
He also worked as an assistant director in various Assamese films director by Dr. Bhupen Hazarika. His cover films include Bonoria Phool, Niyati, Brishti, Dharmakai and Natun Asha (which was completed by his wife Manisha Hazarika after his death).
He also composed music for documentaries like Flora and Fauna of North East India, Wheels and the Horizon and Jyoti Chitraban. Some of his evergreen song numbers include Xurat magan, Dekha nai, Tumar moromore Mur, Bhorir toluwar pora, Ei akash bor bishal among others.
He completed seventeen songs for five dramas during his stint with Lakhimi Theatre of Goalpara. He also handled the music for notable plays like Siraj directed by Phani Sarma, Baan by Prafulla Bora, Janma, Yuddha Ghosanar Din, Jerengar Sati produced by Progoti Shilpi Sangha.

He also performed at the International Conference of Political Songs on 14th February 1972 in Berlin accompanying his elder brother Dr. Bhupen Hazarika.
Jayanta Hazarika’s advent grade style was inspired by the pioneering style of legendary film maker Jyotiprasad Agarwala. Like Jyotiprasad Agarwala, Jayanta Hazarika also combined the elements of Assamese folk, Indian classical and Western music and created a contemporary musical genre different from Assamese roots.
The use of unusual notes was a special characteristic of Jayanta Hazarika’s music and the underlying tone of the pathos was a characteristic feature of his typical style.

Apart from the commercial performances, Jayanta Hazarika also pioneered the formation of the Sur Bahini, a mobile musical brigade which was committed to work selflessly for the welfare of the poor.
The LP disc which was produced by HMV after his death included songs and interview excerpts transferred directly from the recording spools procured from the radio station.
3180