Laishram Mema is a singer from Manipur. Considered the “melody queen of Manipur”, she is the first ever Manipuri singer to sing in a Bollywood movie.

She has been conferred with the title of “Nightingale of North east India” and is the pioneer of Hindustani sugam sangeet in Manipur.

Life and Career of Laishram Mema: 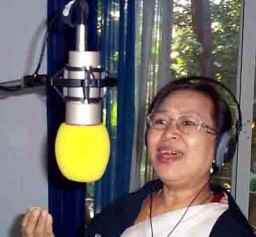 Mema started singing at the age of 6. She spent her days learning Hindustani classical music at Lucknow. She also learnt dance there. She is a “nritya visharad” in Kathak and also a “sangeet visharad”.
Mema had been giving programmes in both AIR and Dordarshan. She first gave a programme in 1969 in AIR Ahmadabad. She gave a programme in DD Bombay in 1973. She is perhaps the first person to sing in Hindi by a Manipuri in an All India Radio programme.

The India book house, the producer of many children comic books, including the “Amar Chitra Katha” produced two cassettes sung by her.
She did playback for the film “Dilawar” with Suresh Wadekar. She has sung duet with Lata Mangeshkar for a Manipuri film which has been highly acclaimed.

Her book “Sur Vigyan” is recognized as a textbook for music in Manipur. She has also established the Jhafirband Sangeet Kala Academy in Assam. She has set up a cultural training institute at Imphal. There are branches of the institute in Lamphel, Khongjom, Nithoukhong and Kalapahar.

Awards and Recognitions of Laishram Mema:

In 1982 Laishram Mema was declared as the “best playback singer” by the Sur Singar Samsad, Bombay and was awarded with the SD Burman award in the 7th Film Sangeet Sammelan.
She was also honoured with the “Surmani Award” in the 21st “Kal ke kalakar” sangeet sammelan at Bombay in 1983. In 1983 the state government of Manipur awarded her with the “Manipur State Award”In 1983 she was honoured by Digambar Jain Samaj of Manipur with the title “Sur Sagar” for singing Jain Bhajan and selfless dedication to the Lord.
4733