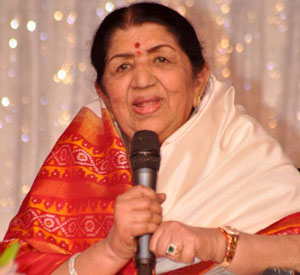 A living legend, known as the “Nightingale of India” and the “Melody Queen”, Lata Mangeshkar is one of the greatest singers of India. Lata Mangeshkar has made outstanding contribution to make music popular throughout India and the world. Lata is known for singing songs of different moods and variety and the songs range from classical to patriotic, romantic to sad and bhajans to ghazals. Lata Mangeshkar has been one of those rare singers whose voice would suit all actress and stars as she has the ability to become the voice of every generation. She has recorded songs for over thousand Hindi films and has sung in over 36 regional languages. Lata Mangeshkar was featured in the Guinness Book of World Records from 1974 to 1991 for making the most recordings in the world. She is the second vocalist ever to have been awarded the Bharat Ratna. She was honoured with the Padmavibhushan, Padmabhushan and the Dadasaheb Falke Award. She was awarded Filmfare Lifetime Achievement award in 1993. 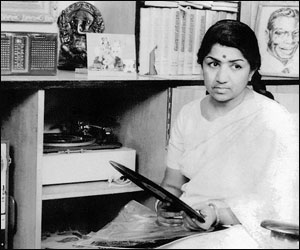 Lata Mangeshkar was born on September 28, 1929, in Indore, Madhya Pradesh. Her father Deenanath Mangeshkar was a classical singer and theater actor. Her mother Shevanti was Deenanath’s second wife. She was named Hridaya at birth, her parents however, christened her Lata after the character Latika from her father’s play “Bhaw Bandhan”. She is the elder sister of Asha Bhosle, Hridaynath Mangeshkar, Usha Mangeshkar and Meena Mangeshkar. Lata took her first lessons from her father. At the age of 5 years she worked as an actor at her father’s musical plays. She moved to Mumbai in 1945. She took lessons in Hindustani Classical Music from Ustad Amanat Ali Khan, Ustad Amanat Khan Devaswale, Pandit Tulsidas Sharma. 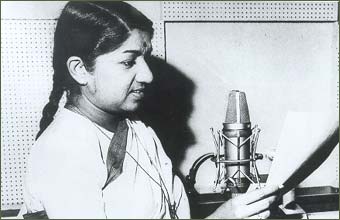 Lata Mangeshkar, due to her melodious voice, is known as the “Nightingale of India”. She is undoubtedly the best singer India has ever produced. Her contribution to make music popular throughout India and the world is remarkable. Lata always wanted to become a classical singer when she started working but she gave up as she could not put in long hours of practice that were required. She has recorded songs for over thousand Hindi films. She has sung in over 36 regional languages.  Her mellifluous voice earned her accolades in India and in abroad. She has been the recipient of several awards in the national and international forum.

In her singing career she has sung raag-based songs, semi classical songs, bhajans, soft songs and so forth. Her voice matched splendidly with the likes of Kishore Kumar, Md Rafi, Manna Dey, Hemanta Kumar, Kumar Sanu, Udit Narayan and several other singers of the film industry. She sang songs composed by Anil Biswas, Shankar Jaikishen, Naushad, S DBurman, R D Burman, Hemant Kumar, Salil Chaudhry, Khayyam, Madan Mohan, Lakshmikant Pyarelal, Shiv Hari, AR Rehman and so forth. Her reign over the world of playback singing for female characters has been undisputed over the decades. She has lent voice to heroines from Madhubala to Aishwarya Rai. Although she worked with almost all the big music directors and singers of her time she had a special bonding with Laxmikant Pyarelal. She recorded solo, duet and chorus backed songs in different languages.

She sang in the Marathi movie “Pahili Mangala-gaur” in which she sang the song “Natali Chaitraachi Navalaai”. Her first Hindi song was “Mata Ek Sapoot ki Dunia” for the Marathi film “Gajaabhaau”. At the onset of her carrer in the Hindi film industry producer Sashadhar Mukherjee dismissed her voice as “too thin”. She was given the first major break with the song “Dil Mera toda” in the film “Majboor” by Ghulam Haider. One of her first major success was the song “ayega anewala” from the lfilm “Mahal”.On June 27, 1963 against the backdrop of the Sino-Indian war she sang the song “E Mere Watan ke Logo” in the presence of Prime Minister Jawaharlal Nehru. The song is said to have made Nehru filled with tears and he confessed “Beti Toone Mujhe Rula Diya”. She sang in many concerts in India and abroad. She has also sung in Royal Albert Hall in London. In 1999 she was nominated as a member of the Rajya Sabha.

Awards and  Recognitions of Lata Mangeshkar:

Lata Mangeshkar’s mellifluous voice earned her accolades in India and in abroad. She has been the recipient of several awards in the national and international forum. In 2001 she was awarded the Bharat Ratna by the Government of India. She is the second vocalist ever to have been awarded the Bharat Ratna. She was featured in the Guinness Book of World Records from 1974 to 1991 for making the most recordings in the world. . The claim was that she recorded 25,000 solo, duet and chorus backed songs in 20 languages.She was honoured with the Padmavibhushan, Padmabhushan, Dadasaheb Falke Award, Maharashtra Bhushan award, NTR national award etc.