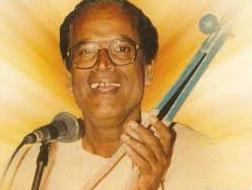 Rameshwar Pathak was born on 3rd March 1938 in Nagaon village of Bhella in Barpeta district. He passed his matriculation exams in the year 1958 and went to M. C. College for further studies. During that time, he concentrated on music and attended numerous ‘Baithakis’ (traditional singing programmes and celebrations before a marriage ceremony).
He also learnt ‘Borgeets’ from maestro Dayal Chandra Sutradhar. In the year 1961, when M. C. College participated in the inter youth college festival in Guwahati, Rameshwar Pathak took part in various singing competitions and went on to win the borgeet, adhunik geet, bhajan and ghazal categories.
At the time after appearing for his B.A final examination, Rameshwar Pathak got a call from Assam Police to join work as an inspector. Rameshwar Pathak died on 3rd December 2010 due to multiple organ failure and other ailments.

In December 1963, Rameshwar Pathak joined the Arya Vidyapeeth Higher Secondary School as a subject teacher. He soon became popular among the students and colleagues as a good singer. His colleague, Afjal Hussain, pressed him to give an audition for All India Radio Guwahati. During that audition, Rameshwar Pathak sung a modern Assamese song.
The judge, Kamal Narayan Choudhury told him to opt for folk songs rather than sacrificing his bright career for modern songs. Pathak successfully passed the audition and became a familiar name for the listeners of radio.
During that time, many invitations for performances across the state started coming his way. Rameshwar Pathak met his future wife Dhananda Pathak in the year 1973.
She was pressurized by her elder brother to give an audition for the radio. Her brother took her to Rameshwar Pathak who guided her for the audition. She was selected and after a year, they were married.
After their marriage, Rameshwar Pathak and Dhananda Pathak collaborated in a number of gramophone records and many cassettes. They presented Assamese Lokageet in duet and chorus style for the first time and became popular as exponents of Assamese folk music.
Rameshwar Pathak has given performances across Assam and in a number of other states including Delhi, Bangalore, Mumbai, Orissa, Himachal, Calcutta and the North Eastern states.
He has also lent his voice for a number of films including Aparajeya, Santan, Manas Kanya, Sewali etc along with a documentary film titled ‘Moi Amar Laksminath’ directed by Kalaguru Bishnu Prasad Rabha.

Awards and Recognitions of Rameshwar Pathak:

Rameshwar Pathak was awarded the Sangeet Natak Akademi award in the year 1997 and also was a recipient of Silpi Bota.
2997