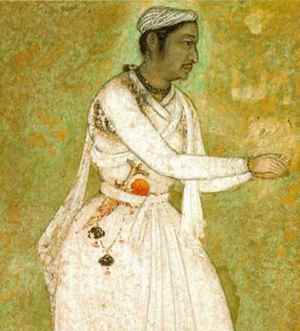 Tansen is one of the greatest composer-musician  in Hindustani classical music. He was a gifted vocalist. His musical compositions are priceless in the world of music. He is considered to be the father of Hindustani music.
Almost all the “gharanas” of Hindustani Classical music have connections with the lineage of Tansen. Tansen was known for varied compositions. He was an instrumentalist who popularized and improved the plucked rubab.
Tansen was among the “Navratnas” at the court of Mughal emperor Akbar. He was given the title “Miyan” by Akbar.  According to legends Tansen could bring rains, start fire, could bring wild animals to listen with attention by his singing.

Tansen was born into a Hindu Gaur Brahmin family in 1506 in a village near Gwalior. His father Makrand Pandey was a poet and accomplished musician. Tansen was a disciple of Swami Haridas, the legendary composer. From his guru Tansen learnt “dhrupad” and local composition.
He used to sing at local Shiva temple. Later Muhammad Ghaus became his spiritual mentor. Tansen was married Akbar’s daughter and he converted to Islam. According to legends Tansen’s death was caused by conflagration while he was singing the raga “Deepak”.
While some say that Tansen died on April 26, 1586. According to other belief Tansen died in 1589. He was buried in the mausoleum complex of his Sufi guru Muhammad Ghaus at Gwalior.
His tomb in Gwalior at Hajira is a sacred spot for thousands of tourists and singers. Several films have been made on him. “Tansen” (1943), “Tansen” (1958), “Sangeet Samrat Tansen” (1962) have been made on the life of Tansen. 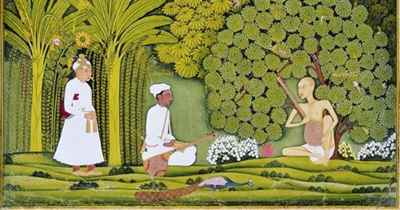 The legendary musical expertise of Tansen is unsurpassable in the history of Indian music. Almost every “Gharana” of music traces its origin to Tansen. The “Dhrupad” style of singing was formalized by the practice of Tansen and Haridas and Baiju Bawra.
He composed several ragas notable among them are Darbari Kanada, Darbari Todi and Rageshwari, Miyan ki todi, Miyan ki malhar, Miyan ki mand and Miyan ka Sarang. Tansen could imitate the sound of animal calls and bird song.

The title “Tansen” was conferred on him by the ruler of Gwalior. The works of Tansen were a fusion of the Bhakti tradition of his guru Haridas and the Sufi tradition of his mentor Ghaus.
In his music could be noticed the composition in Brajbhasha invoking traditional motifs such as Krishna or Shiva. While at the Gwalior court he was influenced by musicians including the musically proficient queen Mriganayani.

He joined the court of King Ramachandra Baghela of Rewa where he remained form 1555-1562. He joined the court of Akbar in 1562. Tansen was among the “Navratnas” (nine jewels) at the court of Mughal emperor Akbar. He was given the title “Miyan” by Akbar.
he is known as Miyan Tansen. Near the chamber of Akbar there was a pond with a small island in the middle. Here musical performances would be given. The tank called “Anoop Talao” near the public entrance hall. Tansen would perform different “ragas” at different time of the day.

Tansen sang and taught at the court of Emperor Akbar. Other than a musician he was a great poet. He composed many new ragas.  During his reign Akbar fought many wars. He used to take Tansen to many of the wars. Tansen was quite courageous.

According to legends Tansen could bring rains by singing raag “Megh malhar”. He could start fire by singing the Raag “Deepak”. Others say that he could bring wild animals to listen  with attention.
It is said that when he sang in the court of Akbar the candles used to light up automatically. Tansen authored “Sangeeta Sara” and “Rajmala which constitutes an important document on music.
A national music festival known as the “Tansen Sangeet Sammelan” is held every year in December near the tomb of Tansen at Behat in the memory of Tansen.
2870