Ustad Bade Ghulam Ali Khan was a Hindustani classical vocalist belonging to the Patiala gharana. The ustad’s voice had a wide range. He sang with effortless rendition and flexibility in movement. He was unsurpassed as the master of the thumri tradition.

Life and singing career of the Ustad 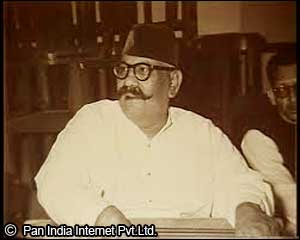 Ghulam Ali Khan was born on April 2, 1902 in Kasur, then India now in Pakistan. His father Ali Baksh Khan was a famous singer. After the partition of India Khan went to Pakistan for a brief period and then again returned to India permanently. He was married to Ali Jiwai. After the death of his wife he married Alah Rakhi. His son Munawar was also a classical singer and grandson Raza Ali Khan is also a classical vocalist.Khan died at Hyderabad in 1968 following prolonged illness.

Khan learned Sarangi and vocal from his uncle at the age of seven. He also learned a few compositions of his father. He improvised the instrument kanoon to the present swaramandal which became a trademark of this famous singer. He was a disciple of Ustad Akhtar Hussain Khan and Ustad Ashiq Ali Khan of Patiala gharana. He started his career as an accompanist on the sarangi with female singers. He gained fame as a vocalist after his performance in Calcutta. He has recorded several khayal and thumris. Some of his popular renditions are “yaad piya ki aye”, “Teerchi najariya ke baan”, “aye na baalam”, “naina more taras rahe” etc.Khan stayed away from singing in films for a long time despite request pouring in. He sang two songs in the film “Mughal-e-Azam”.

Awards and  Recognitions of the Ustad:

Ustad Bade Ghulam Ali Khan was the recipient of the Sangeet Natak Akademi Award. He was also awarded the Padma Bhushan. The Bade Ghulam Ali Khan yaadgar Sabha founded by his disciple keeps his music alive. It conducts many concerts. The Sabrang Utsav organized by the sabha is held every year in the memory of the ustad. The ustad has left many compositions under his pen name Sabrang.
825