Yumlembam Gambhini Devi is an eminent dancer and singer of Manipur. She is the first female artist in the state to get the “Top” grade artist of All India Radio, Imphal in Nat Sankirtan Music (Music) in 2008.
The Government of India honored her with the Padmashree in the filed of dancing and singing in 2005. She is the recipient of the Sangeet Natak Academy Award for her contribution in the field of Nat Sankirtan in 1988. 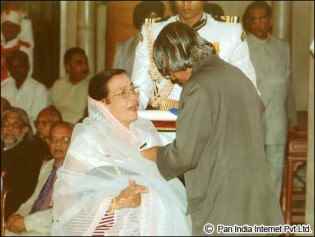 Gambhini Devi was born on January 1, 1945, at Yaiskul Hiruhanba Leikai in Manipur. She was the fourth among the eight siblings. Her father Gulap Singh was a professional Nat Sankirtana and Sangeet artist.
She received her formal training in dance and singing at the age of 5 years. She was married to late Konsam Thopi Singh who was an instructor of Song and Drama Division Imphal.

Since her childhood Yumlembam Gambhini Devi showed keen interest in singing and dancing. She has been giving singing and dancing performances since childhood which gave her the due recognition as an artist. She gave her first dance performance at the age of 7.
She played the role of “Bishnupriya” at the Gopinath Mandap at Yaiskul. She has performed in Ras Leelas at Shree Shree Govindajee temple since the age of 9 years. She has played the role of “Radha’ in the Ras Leela performed in the Shree Shree Govindajee temple.

She is the first female in the state to get the “Top” grade artist of All India Radio, Imphal in Nat Sankirtan Music (Music) in 2008. She served as “guruhan”, “Sutradhari” at the Department of Ras at Jawaharlal Nehru Manipur Dance Academy. She retired in 2005 from the academy. She is presently serving as a visiting guru to the academy.

She imparts Nat Sankirtan and Sangeet training to young artists. She has serves ad the member of selection committee, Rabindra Bharati University, Kolkata and has been the member of Central Dance Audition Board of Doordarshan, New Delhi.
She founded YGR, Nat Sankirtana Sheidam Shang about two decades back. She has trained many artistes, including from Delhi, Kolkata, Mumbai and Bangladesh.

Yumlembam Gambhini Devi has received much recognition for her contribution in the field of dance and singing.  She has received 3 gold medals of khubak Eshaei, 13 silver medals for presenting Nat Sankirtana and 4 gold medals for presenting “Basak”.
Her name was in the Directory of Indian Women today in 1976 published by the Indian international Publication and Famous India nation’s Who’s and Who, 1978 and in the Reference Asia 1989 5th Edition published by the Refacimento International.

She is the recipient of the “Nritya Ratna award” in Manipuri dance by the Manipuri Sahitya Parishad in 1979.She is the recipient of the Sangeet Natak Academy Award for her contribution in the field of Nat Sankirtan in 1988.
She received the Nat Sangeet Award of Manipur State Kala Akademi in 1980. She received the Senior fellowship of the Department of Culture, Ministry of Human resource Development, New Delhi in 1988. The Government of India honored her with the Padmashree in the filed of singing and dancing in 2005.
11364