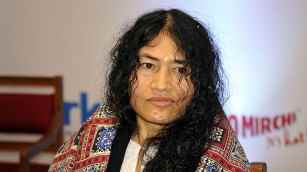 Irom Sharmila is a civil rights activist, political activist and poet from Manipur. She was on a hunger strike from November 2, 2000 to 26 July 2016 for the demand of repeal of the Armed Forces (Special Powers) Act, 1958.
During that period she refused food and water. She has been called the “world’s longest hunger striker”. She is known as the “Iron Lady of Manipur” or “Mengoubi” (the fair one).
Her struggle is “an extraordinary struggle of an extraordinary woman”. On 26 July 2016, Irom Sharmila, who had been on a hunger strike since 2000, announced that she would end her fast on 9 August 2016.

Irom Sharmila Chanu was born on March 14, 1972. Her mother is Sakhi Devi and father was Irom Nanda. She is the youngest of the five brothers and four sisters.
Since her childhood she used to read “Bhagvad Geeta” and practiced Yoga and started learning nature cure and stenography. She channeled much of her energy into journalism and poetry.

On November 2, 2000, at Malom in Manipur ten civilians were killed by the Assam Rifles, one of the Indian paramilitary forces operating in the state, while they were waiting at the bus stop.
Among the dead were a 62 year old woman and an 18 year old Sinam Chandramani, a 1988 National Child Bravery Award winner. The incident came to be known as the “Malom Massacre”. On hearing the incident Sharmila, a 28 year old girl, decided to fast to protest the killings.
She began her fast taking neither food nor water. Her health deteriorated rapidly. The police forcefully use nasogastric intubation to keep her alive. She is being nasal fed forcibly at the state run Jawaharlal Nehru Institute of Medical Sciences.

Her primary demand to the Indian government is the repeal of the Armed forces (special Powers) Act, 1958. According to the act the soldiers could indefinitely detain any citizen on suspicion of being a rebel. According to the human rights group the act permits torture, forced disappearance and extrajudicial executions.
Three days after she began her strike she was arrested by the police and was charged with an attempt to commit suicide which is unlawful under section 309 of the Indian Penal Code. She was later transferred to judicial custody.
She is regularly released and rearrested every year since under Section 309 of the Indian Penal Code a person who attempts to commit suicide is punishable with simple imprisonment for a term which may extend to one year.
Therefore she is released once every year, only to be rearrested for continuing the fast. In 2006 she headed for Jantar Mantar in New Delhi for a protest demonstration.
While in New Delhi she was rearrested by the Delhi Police for attempting to commit suicide. She was taken to All India Institute of Medical Science.

Sharmila has written hundreds of poems. She has completed two poetry books in Manipuri language “Imadi khongdai Setlaroi” and “Khunai kanba Numit” consisting of around 100 poems.
Her poems include “Tonight”, “Wake Up” etc. “Fragrance of Peace” is a collection of poems of Sharmila which has been translated into English from Meiteilon (Manipuri) and recently released.

Save Sharmila Campaign has been launched by a joint network of civil societies to generate awareness about Sharmila, her struggle and sacrifice among the general public with some demand to the government.
They raise voice for Sharmila. Save Sharmila Campaign has organized a candle light solidarity prayer on June 25, 2011, at Raj Ghat in New Delhi. People from all walks of lives participated in the event. It also organized documentary screening and panel discussion in various colleges in Delhi

Sharmila is a follower of Mahatma Gandhi’s non violence. In 2006 when she was released for four months she went to Raj Ghat in New Delhi to pay floral tribute to her idol Mahatma Gandhi. 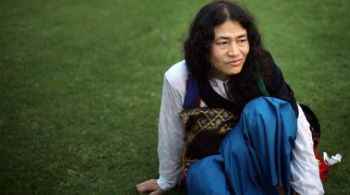 Sharmila has become an “icon of public resistance”. In 2006 she headed for Jantar Mantar in New Delhi for a protest demonstration. Several students, human rights activists and concerned citizens joined her in the protest demonstration.
While in New Delhi she was rearrested y the Delhi Police for attempting to commit suicide.  She was taken to All India Institute of Medical Science. While in the hospital she wrote letters to the prime Minister, President, and home minister.
Here she met and won the support of Nobel-laureate Shirin Ebadi who promised to take up her cause to the United Nations Human Rights Council. In 2011 she was involved in the Anti-Corruption movement on the invitation of Anna Hazare. He had promised her that he would visit Imphal.
The Trinamool Congress has reiterated support to Sharmila’s cause. The Communist Party of India has also reiterated their support to Sharmila’s cause and the repeal of the force. Many NGOs in Assam have supported Sharmila and the repeal of the force.
The Christian church, the NCCI, the Roman Catholic Archbishop of Guwahati, students, social activists etc have lent their support for the cause of Sharmila. BJP politician Varun Gandhi has also supported the cause of Sharmila. She has some support in Europe as well.

“The Silent Poet” is a 17 minute film directed by Manipur-based journalist Borun Thokchom. It won the National Award for best debut director for his documentary.  It was adjudged the best documentary in the 2nd Siliguri International Short and Documentary Film Festival held in Siliguri, West Bengal.
The film talks about her poems and particularly “O stranger” which mirrors the amalgamation of events happening in Manipur and northeast. Kavita Joshi’s short documentary “My Body My Weapon” is based on the life of Sharmila.
Deepti Priya Mehrotra’s “Burning bright: Irom Sharmila and the Struggle for Peace in Manipur” details her life and the political background of fast.  Ojas S V, a Pune theatre artist has been performing “Le Mashale” a monopoly based on the life of Sharmila.

Sharmila was awarded the 2007 Gwangju Prize for Human Rights. The award is given for an “outstanding person or group, active in the promotion and advocacy of peace, democracy and human rights”. In 2010 she was awarded with the Rabindranath Tagore Peace Prize by the New Delhi IIPM.
She was awarded the “Sarva Gunah Sampannah” award for peace and harmony. She was the recipient of the first Mayillama award (Kerala) in 2009. She is also the recipient of the Adivasi Ratna Award. A Guwahati-based women’s organization, the Northeast Network nominated Sharmila to the 2005 Nobel Peace Prize.
1791