Medha Patkar is a social activist and social reformer. She is the founder member of Narmada Bachao Andolan and National Alliance of People's Movements.
Patkar is an alumnus of TISS, a premier institute of social science research in India. She also took part in 2011 Indian anti-corruption movement led by veteran social activist Anna Hazare.

Medha Patkar was born on 1 December 1954 in Mumbai, Maharashtra to Indu and Vasant Khanolkar. She took active interest in socail works since her childhood. She graduated with a bachelor’s degree in science from Ruia College in Mumbai and earned an MA degree in Social Work from Tata Institute of Social Sciences.
After her studies Patkar worked with voluntary organizations in Mumbai's slums for 5 years and tribal districts of North-East Gujarat for 2 years. She later became immersed in the tribal and peasant communities in Maharashtra, Madhya Pradesh and Gujarat. 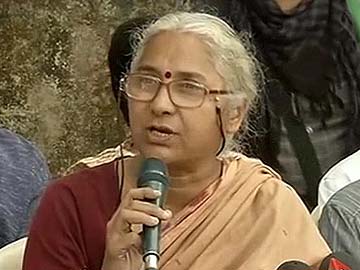 Medha Patkar is a social activist working for the uplift of lives of people. Patkar is the founder member of Narmada Bachao Andolan. She is still working with Narmada Bachao Andolan with a mass base in tribal and peasant communities in Gujarat, Maharashtra and Madhya Pradesh.
She is also the founder of National Alliance of People's Movements. She is the National Convener of National Alliance of People's Movements, an alliance of progressive people’s organisations, with the aim of working on issues related to socio-economic justice, equity, political justice among others.
She was a representative to the World Commission on Dams to research the environmental, economic and social impacts of the development of large dams globally.

Medha Patkar is an advocate of human rights. She organises protest movements for rights of the people. She protested against the setting up of Tata Motors plant at Singur in West Bengal.
She also supported the anti-corruption campaign of Anna Hazare. Patkar, with villagers of Lavasa, protested against the lavasa project. She oganises protests to save Sugar-Cooperative sector in Maharashtra.

Awards and honours to Medha Patkar