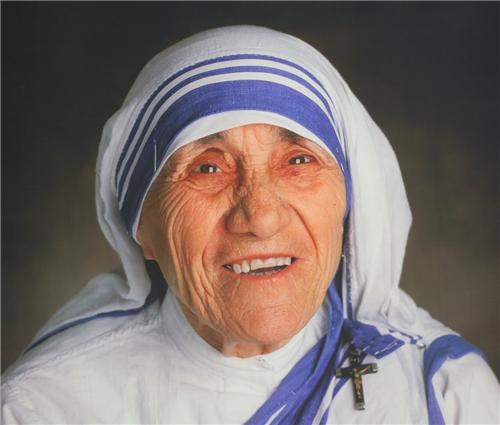 Mother Teresa was a server of the poor. She spread the message of love and humanity, especially for the poorest of the poor.
A recipient of the Nobel Peace Prize in 1979, Mother Teresa founded the Missionaries of Charity whose aim was to care for “The hungry, the naked, the homeless, the crippled, the blind, the lepers, all those people who fee unwanted, unloved , uncared for throughout the society, people that have become a burden to the society and are shunned by everyone.” She was a great believer of the power of prayer.
The Government of India awarded her with the Bharat Ratna in 1980. Her beautification by Pope John Paul II after her death gave her the title “The Blessed Teresa of Calcutta”.  Mother Teresa has left testament of unshakable faith, invincible hope and extraordinary charity.

Mother Teresa was born on August 26, 1910 in Skopje, a city situated at the crossroad of the Balkans. She was the youngest of the siblings of the family of Nikolle and Drana Bojaxhiu. Her father was involved in Albanian politics.
He died when she was 8 years old. Her mother raised her as a Roman Catholic after the death of her father. She was born as Agnes Gonxha Bojaxhiu. However she considered August 27 to be her “true birthday”, the day she was baptized.
In her early years she was fascinated by the stories of the lives missionaries in Bengal. She also resolved to commit herself to religious life. At the age of 18 years she left her home to join the Sisters of Loreto as a missionary in Ireland. She went to Loreto Abbey in Ireland and learnt English.
Mother Teresa arrived in India in 1929. She began her novitiate in Darjeeling. She learnt Bengali and taught at the St Teresa’s school. On May 24, 1937, she made her Final Profession of Vows, becoming, as she said, the “spouse of Jesus” for “all eternity”.
From that time on she was called Mother Teresa. The whole of Mother Teresa’s life bore witness to the joy of loving. But there was another side to this great woman- her interior life was marked by an expression of deep and painful feeling of being separated from God. She called her inner experience “the darkness”.

During the last years of her life, despite her increasingly severe health problems she continued to govern her society of charity and respond to the needs of the poor and the Church. She blessed a new successor and made a trip abroad. After meting Pope John Paul II for the last time she returned to Calcutta and spent her final weeks receiving visitors and instructing her sisters.
She suffered a heart attack in Rome in 1983 while visiting Pope John Paul II. She received an artificial peacemaker after her second attack in 1989. She continued in office despite heart problems.
"By blood I am Albanian. By citizenship, an Indian. By faith, I am a Catholic nun. As to my calling, I belong to the world. As to my heart, I belong entirely to the heart of Jesus. ”
Her earthly life came to an end on September 5, 1997. The government of India gave her an honour of state funeral. Presidents, prime ministers, queens and special envoys from all over the world were present at her funeral. Her body was buried in the Mother House of the Missionaries of Charity.
Her tomb is now a place of pilgrimage where people irrespective of caste and religion come to offer prayers.  She is not yet a catholic saint. On October 19, 2003, the Pope John Paul II beautified Mother Teresa in front of hundreds of thousands of pilgrims gathered in the St Peter’s Square.
A second miracle credited to Mother Teresa is required before the Catholic Church could recognize her as a saint. Her beautification by Pope John Paul II after her death gave her the title “The Blessed Teresa of Calcutta”. 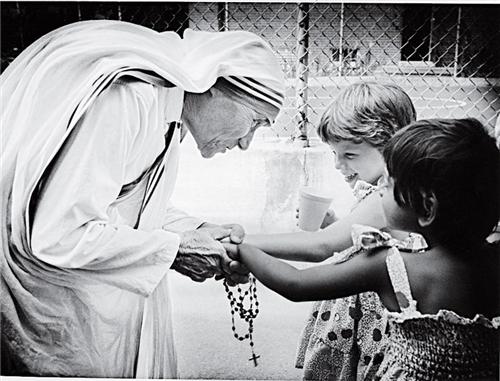 Mother Teresa has left testament of unshakable faith, invincible hope and extraordinary charity. Her response to Jesus’ plea, “Come be My Light” made her a Missionary of Charity, a “mother to the poor”, a symbol of compassion to the world and a living witness to the thirsting love of God.
She was a symbol of hope to the aged, destitute, poor, unemployed, diseased, terminally ill and those abandoned by their families.

In her early years she was fascinated by the stories of the lives missionaries in Bengal. She also resolved to commit herself to religious life. At the age of 18 years she left her home to join the sisters of Loreto as a missionary and never saw her family again.
She began her missionary work with the poor in 1948. She adopted the Indian citizenship and spent a few months in Patna to receive a basic medical training in the Holy family Hospital.
She then ventured out into the slums. She visited the families, washed the sores of children, cared for old man lying sick on the road and nursed women dying with TB.

She opened houses in almost all the communist countries. She formed the Co Workers of Mother Teresa and the sick and the Suffering Co Workers.
She also began the Corpus Christi Movement of priests in 1981 as a “little way of holiness”.Several sisters joined her in her service to mankind. By 1997 her sisters numbered nearly 4,000. In 1952 she opened the first home for the dying.
The Kalighat Home for the Dying is a free hospice for the poor. “A beautiful death” she said, “is for people who lived like animals to die like angels- loved and wanted.” She also opened a home for people suffering from leprosy.

She opened the Nirmala Shishu Bhavan, for orphan and homeless youths. The period 1960s saw the opening of hospices, orphanages and leper houses all over India.
In 1982 Mother Teresa rescued 37 children trapped in a front line hospital by brokering a temporary ceasefire between the Israeli army and the Palestinian guerillas.
Accompanied by the Red Cross she travelled through the war zone to the devastated hospital to evacuate the young patients. She assisted radiation victims at Chernobyl and earthquake victims in Armenia.

On September 10, 1946 during a train ride from Calcutta to Darjeeling Mother Teresa received her “inspiration”, her “call within a call”.
Over the course of the nest weeks and months, by means of interior locutions and visions, Jesus revealed to her the desire of His heart for “victim of love” who would revisit “His love on souls”. “Come be My light”, He begged her.
“I cannot go alone”. He revealed His pain at the neglect of the poor. He asked mother Teresa to establish a religious community the Missionaries of Charity Sisters, dedicated to the service of the poorest of the poor. Nearly two years of testing passed before she received permission to begin.
On August 17, 1948, she dressed for the first time in a white, blue bordered sari and passed through the gates of her beloved Loreto Convent to enter the world of the por. Mother Teresa founded the Missionaries of Charity.
The aim of the mission was to care for “The hungry, the naked, the homeless, the crippled, the blind, the lepers, all those people who fee unwanted, unloved , uncared for throughout the society, people that have become a burden to the society and are shunned by everyone.”
The charity established several leprosy outreach clinics throughout Calcutta, providing medication, bandage and food. On October 7, 1950 the new congregation of the missionaries of charity was officially established in Calcutta.
She founded the Missionaries of Charity Brothers in 1963 the contemplative branch of the sisters in 1976, the contemplative brothers in 1979 and the Missionaries of Charity fathers in 1984.

At the time of her death her missionaries of Charity had over 4,000 sisters, and an associated brotherhood of 300 members, operating 610 missions in 123 countries.
These included hospices, homes for people with HIV/AIDS, leprosy and tuberculosis, soup kitchens, children and family counseling programme, personal helpers, orphanage and schools.

The Pope recognized the miracle of Mother Teresa when the tumor in the abdomen of an Indian woman was healed after the application of a locket of Mother Teresa’s picture. This which later contradicted by her husband who said that the woman recovered due to medication and it was not due to any medication.

Mother Teresa was no evangelist in the 19th century mould. She remained true to her religion till her last breath, but chose not to impose it on others.
She was a great believer of the power f prayer. She urged those who come to her that they must be good Hindus or Muslims or Christians or Sikhs, and in that process must learn to “find God”.
She knew that in the overwhelmingly non Christian India, her path had to be a unique one. She reached out to the millions of people recognizing their faces to be the face of God. "By blood I am Albanian.
By citizenship, an Indian. By faith, I am a Catholic nun. As to my calling, I belong to the world. As to my heart, I belong entirely to the heart of Jesus.”
For Mother Teresa to love one’s neighbor was to love God. “We are called upon not to be successful, but to be faithful” she said. She exemplified that faith in prayer, in love, in service and in peace.

Awards and honour to Mother Teresa

Mother Teresa was a figure of international repute. Her contribution towards the “poorest of the poor” was recognized worldwide. She made equal contribution to people nationally and internationally. She has been a recipient of several awards.
Mother Teresa was awarded the Nobel Peace Prize in 1979. The Government of India awarded her with the Bharat Ratna in 1980. She was awarded the Padmashree by the government of India in 1962 and the Jawaharlal Nehru Award for International Understanding in 1969.
She was the recipient of the Pope John XXIII Peace prize in 1971. She received the Philippines-based Ramon Magsaysay Award. She was a recipient of the order of Merit from the UK and US.
502