Ram Mohan Roy was a humanist, religious, social and educational reformer of India. He was the founder of the Brahmo Samaj. He is noted to have made efforts to abolish sati practice and child marriage in India. He is referred to as the Maker of Modern India. 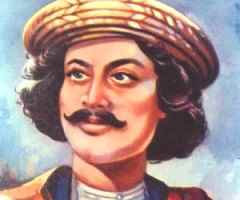 Ram Mohan Roy was born at Radhanagore, Hoogly in West Bengal on May 22, 1722. He was born into a Brahmin family to Ramakanta Roy and Tarini Devi.
Roy was an independent thinker but his father was an orthodox Hindu Brahmin which resulted in differences between them and Roy left home to travel across the Himalayas and Tibet and then returned to home.
Roy was educated in English, Persian, Arabic, Sanskrit and Bengali. He studied the works of the greatest scholars and evolved into a great thinker. Roy also worked as an employee of the British East India Company.
He was married three times. Roy visited England in 1831 as the ambassador of Mughal emperor Akbar. He died in Britain in 1833 of meningitis. A statue of Ram Mohan Roy has been built in Bristol in his honour.

Reforms made by Roy

Ram Mohan Roy advocated the changes in society in all its forms. He was against idol worship and orthodox Hindu rituals. He was against conservatism and superstition. Ram Mohan Roy is particularly remembered for his efforts to abolish the practice of sati and child marriage in India.
Roy was a supporter of the rights of women. He favored the equality of women. He supported the right for women to remarry. He supported the education of women. He demanded property inheritance rights for women.

Ram Mohan Roy was the founder of the Brahmo Samaj. Brahmos believe in the existence of one God. According to them worship of God needs no fixed place or time.

Ram Mohan Roy set up the Brahmo Sabha in 1828. The sabha was a movement of the reformist Bengalis to fight against social evils.

Roy in 1815 founded the Atmiya Sabha. It was an association for the dissemination of the religious truth and the promotion of free discussion of theological subjects.

Ram Mohan Roy was a great scholar and an independent thinker. He supported the advocacy of Upanishads and Vedas. He also translated the Upanishads and other sacred books into English and Bengali. Roy challenged the Indian culture and tradition and sought to integrate Western culture and Indian culture.
He, however, had a high regard for India and its culture and Hinduism. He supported the English education in India. He also established schools and modernized the education system of India. Roy set up the Hindu College at Calcutta in 1817, which was renamed as Presidency College in 1856.
He founded the Anglo-Hindu School in 1822. He also set up the Vedanta College. He supported the study of English, Science, Western Medicine and Technology. Roy released that India would be a backward country if the countrymen did not have knowledge about Western education.
He also published newspapers. He published the Brahmonical Magazine. Sambad Kamudi was one of his notable magazines. He published the Mirat-ul-Akbar in Persia language.
His work namely “Maha Nirvana Tantra” along with British William Carey and scholar Hariharananda Vidyabagish and its judicial sections were used in the law courts of English settlements in Bengal as Hindu law for adjudicating upon property disputes of the zamindari.

Ram Mohan Roy was conferred the title of Raja by Mughal emperor Akbar to convince the British government for the welfare of India.
458