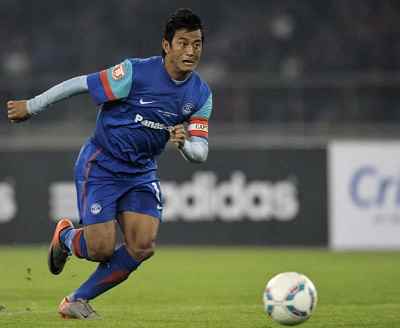 Baichung Bhutia was born on 15th December 1976. His parents were both farmers and originally were not keen on Bhutia’s interest in sports. His elder brother was a footballer at a local level. Baichung Bhutia represented other sports like badminton, basketball and athletics apart from football in his school. After the encouragement from his uncle, Karma Bhutia, Baichung Bhutia started his education in St. Xaviers School in Pakyong in East Sikkim. At the age of nine years, he won a football scholarship from Sports authority of India (SAI) to attend the Tashi Namgyal Academy in Gangtok. He then subsequently went on to play for several school and local club matches in Sikkim, his home state, including the Gangtok based Boys Club which was managed by his uncle Karma Bhutia.
Baichung Bhutia’s performance in the 1992 Subroto Cup, where he won the ‘Best Player’ award, brought him under the notice of the football establishment and administration. His talent was spotted by former Indian goalkeeper Bhaskar Ganguly who helped him to make the transition to Calcutta football. He is popularly nicknamed as the ‘Sikkimese Sniper’ because of his shooting skills in football.
Baichung Bhutia hails from a Buddhist family. He married his long time girlfriend, Madhuri Tipnis, a hotel professional on 30th December 2004 in his native village of Tinkitam in South Sikkim. The couple has been blessed with twins, a boy and a girl on 8th April, 2010.

In the year 1993, when he was sixteen years old, Baichung Bhutia left school to join the professional East Bengal Club in Calcutta. After two years, he transferred to the JCT Mills Football Club in Phagwara and went on to win the Indian National Football League in the 1996-97 session. Baichung Bhutia was the top goal scorer in the league and was subsequently chosen to make his international debut in the Nehru Cup. 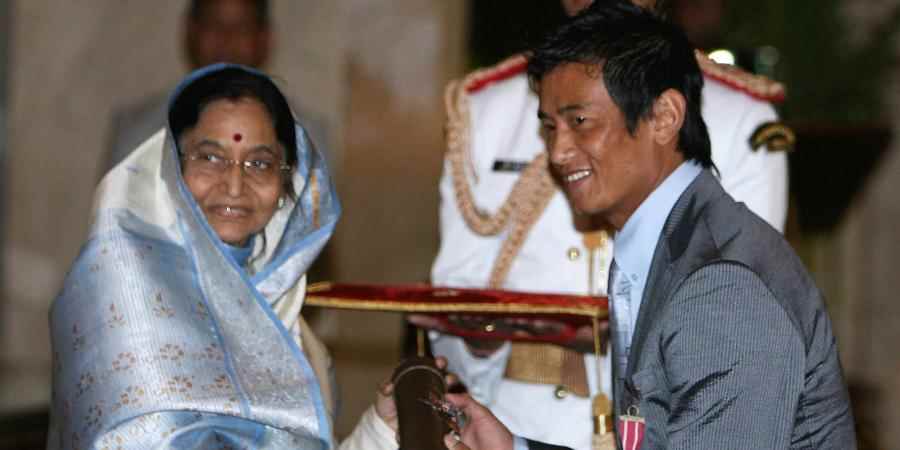 In the year 1997, he returned to the East Bengal Club. Bhutia went on to score the first hat-trick in the local derby match between East Bengal and Mohun Bagan, when he registered one goal in the East Bengal’s victory win in the 1997 Federation Cup semi-final. He became the team captain after that in the 1998-99 session during which East Bengal finished second behind Salgaocar in the league.
Baichung Bhutia also had a subsequent association with Bury Football Club, though he had limited opportunities in playing overseas. On 30th September 1999, Baichung Bhutia travelled overseas to play for Bury in Greater Manchester in England. He signed a three year contract and became the first Indian footballer to play professionally in Europe. This followed with unsuccessful trials for Bhutia with Fulham, Aston Villa and West Bromwich Albion. He also had the difficulty of obtaining a visa and could not make his debut until 30th October 1999 against Cardiff City. On 15th April 2000, he scored his first goal in the English league in the game against Chesterfield. A recurring knee injury restricted him to only three games in his final season at Bury FC and he was released after the club was placed in administration. Baichung Bhutia’s final appearance was in Swindon Town on 27th august 2001.

In the year 2002, Baichung Bhutia returned to India to play for Mohun Bagan for a year. However, due to injuries he failed to play furthermore in that season and missed the trophy win. Later, he returned to East Bengal Club and went on to win the ASEAN Club Championship. He also was named the ‘man of the match’ and finished as the top scorer of the championship with nine goals. He then signed up to play for Perak FA, from August to October 2003 which is a Malaysian championship Club on loan and returned to East Bengal Club for regular session. During the matches that followed in the subsequent years, Baichung Bhutia went on to score many goals. In the year 2005, he signed another Malaysian club, Selangor MK Land, where he made only five appearances. In the year 2005, he joined Mohun Bagan though that game session was poor due to failing the position in the league. In the year 2008, Baichung Bhutia announced the he would quit Mohun Bagan due to the questioning of his football commitments by the club officials. During that time, Baichung Bhutia took part in the third season of a reality dance programme ‘Jhalak Dikhla Ja’ which he went on to win though he had to miss a friendly match and practicing sessions with the club, which had somewhat tarnished his relationship with club Mohan Bagan. Bhutia was later reported to have been officially signed for East Bengal on 22nd June 2009 on a one year contract. During that time, he declared it would be his homecoming club and would end soon. In the year 2011, Bhutia joined the United Sikkim.

Baichung Bhutia’s international career was a remarkable one. He scored his international debut for India in the 1995 Nehru Cup becoming India’s youngest ever goal scorer at the age of 19. The next successful championship was the SAFF Championship in the year 2005 where Bhutia was the captain. Here he was awarded the Most Valuable Player Award and the Fair Play trophy. However in the 2008 SAFF Championship, Indian failed to defend their title after losing to Maldives. The 2009 Nehru Cup was a significant one for Baichung Bhutia as it earned him his 100th cap for India in a win, thereby becoming the first Indian player to reach this milestone. He was also adjudged the ‘Player of the Tournament’ for his remarkable performances in all matches. In the 2011 AFC Asian Cup in Qatar, Bhutia was injured for the first two games and couldn’t later play due to elimination. A short time after the Asia Cup on August 2011, Baichung Bhutia announced his retirement for India with a record of 43 goals in 107 appearances. His farewell match was with the Indian National team on 10th January 2012 against Bayem Munich at the Jawaharlal Nehru Stadium in Delhi.

Baichung Bhutia started a foundation called the ‘Indian Sports Foundation’ in the year 2009 which aimed at helping footballers overcome fatal injuries. He is also the president of the Football Players’ Association of India (FPAI) which promises fair treatment of Indian footballers by dealing with financial aspects such as pension plans. Baichung signed an endorsement deal with Adidas India Marketing Pvt. Ltd in November 2003. At present, he is endorsing Nike India. In the year 2008, Baichung Bhutia was solicited to run with the Olympic torch in India. However, he refused to carry the torch in order to show support for the Tibetan Independence Movement. He was the first Indian sportsperson to refuse to carry the Olympic torch. On 28th October 2008, he started the Baichung Bhutia Football Schools in New Delhi in partnership with football by Carlos Quieroz and Nike.

Baichung Bhutia is the India’s most capped player. He has many international football honors including winning the LG Cup, Nehru Cup, SAFF Championship three times and the AFC Challenge Cup. He was conferred with the prestigious Padma Shri Award by the Indian Government on 26th January 2008. He is also the 19th footballer to receive the Arjuna Award in the year 1999. This award is given by the Indian Government to athletes recognizing their outstanding achievements in national sports. He also has a football stadium named after him in honor of his contribution to Indian football. The stadium ‘Baichung Stadium’ is located in Namchi in Sikkim. He was named the ‘1996 Indian Player of the Year’. Baichung Bhutia won the ‘Indian Player of the Year’ title second time in the year 2008. He has also received the Sikkim State Award and the Asian Player of the Month of May in the year 1999. Bhutia was awarded the most Valuable Player of the 28th Peerless Federation Cup.
5509