Gagan Narang is an ace Indian shooter, especially in the field of Air rifle shooting. He is the first man from India to qualify for the London Olympics. It was in the year 2012 when Narang won the bronze medal in the summer Olympics with a final score of 701.1.

Gagan Narang was born on 6th May 1983 in Chennai. He was born to a Punjabi Arora family to Bhimsen Narang and Amarjit. Though born in Chennai, he was brought up in Hyderabad and tried his hands with the gun at the tender age of six when he shot down balloons in the Chennai Marina Beach Carnival. And since that day, there was no looking back for Gagan for he mastered in the area very soon with his amazing skills. 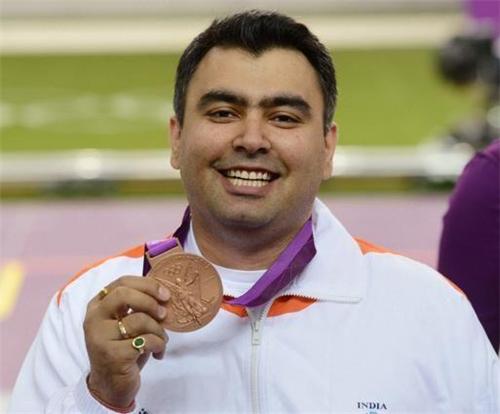 Gagan Narang added four gold medals to the Indian tally at the recently concluded 2010 Commonwealth Games in New Delhi. He set a new record by shooting a perfect 600 in the Men’s 10 meter air rifle singles event. Narang also clinched a silver medal in his pet event in the Asian Games 2010. He has also combined with Abhinav Bindra and Sanjeev Rajput to provide the country with another silver award in the team event behind champions China. He won both the silver in the opening day of the Asian Games.

Gagan Narang has won a gold medal in the Men’s 10 m air rifle competition in the Afro Asian Games held in Hyderabad in the year 2003. He has also won an air rifle gold medal in the World Cup 2006 and followed that event in April 2008. In the pre-Olympic event held in Hanover in Germany, Gagan Narang shot an air rifle score higher than the world record 704.3 as opposed to 703.1 which was set by Thomas Farnik of Austria in the World Cup 2006.

Gagan Narang also qualified for the 2008 ISSF World Cup Final after he won a bronze in the World Cup in China earlier in the year 2008. He shot a perfect 600 in the qualifying round and scored 103.5 in the final round making the total score of 793.5 to gain the world record. On 4th November 2008, he broke Austria’s Thomas Farnik’s record set in the 2006 World Cup final in Granada in Spain.

Gagan Narang was conferred with the Padma Shri award in the year 2010. He was also selected for the prestigious Rajiv Gandhi Khel Ratna award for the year 2010 and was conferred the award by President Pratibha Patil on 29th August 2011. Gagan Narang was also honored by being invited to Indian Grand Prix to wave the checkered flag in the 2012 Indian Grand Prix.