Krishna Poonia was born on 5th May 1977 in Agroha in Hissar district of Haryana. She studied sociology in Kanodia Girls College in Jaipur.
She married former athlete Virender Singh Poonia of Gagarwas village of Churu district in Rajasthan in the year 2000. The couple work for Indian Railways and live in Jaipur. They have a son. 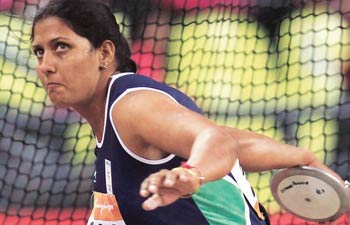 Krishna won the bronze medal in the 2006 Doha Asian Games. She threw the discus to her personal best of 61.53 in the second try and finished behind Aimin Sing of China and Ma Xuenjun of China.
Krishna won gold medal in the 46th Open National Athletics Championship to raise ahead of favorites Seema Antil and Harwant Kaur and registered a career best of 60.10 meters distance.
She contested in the 2008 Beijing Olympics but failed to reach the finals after finishing 10th in the qualifiers with a throw of 58.23. On 8th May 2012, Krishna recorded her personal best throw of 64.76 meters in Hawaii in USA which is a new national record.

In the 2012 London Olympics, Krishna Poonia finished seventh in the women’s discus throw. Her best effort of 63.62 meters came in her fifth and penultimate attempt.
Earlier, she became the sixth Indian to make it to the final round of the track and field events in Olympics after Milkha Singh, P T Usha, S Sriram, Gurbachan Singh Randhawa and Anju Bobby George.


Awards and Recognitions of Krishna Poonia: