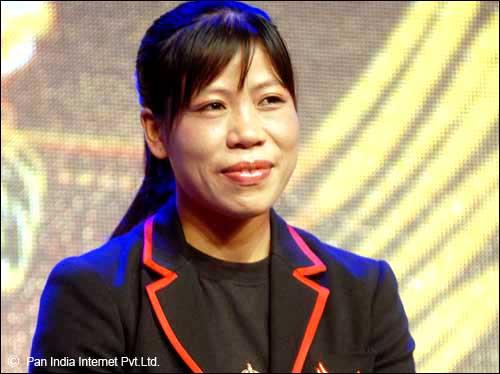 Mary Com is an Indian boxer from Manipur. She is a popular sportsperson of Manipur who brought laurels to the state.
She is the first women boxer from India to have won five times World Boxing Champion successively.
On October 3, 2010, she bore the Queen’s Baton in its Opening Ceremony run in the stadium for the 2010 Commonwealth Games of Delhi.
In 2003 she became the first woman ever to receive India’s prestigious Arjuna Award for her achievement in the field of boxing.

Mary com also known as Chungneijang Merykom or MC Mary Kom was born on March 1, 1983 in Manipur. She was born to Mangte Tonpa and Mangte Akham Kom. She hails from Churachandpur district of Manipur.
She studied at Christian Model High school at Loktak in Manipur, St Xavier’s School at Moirang, Adimjati High school at Imphal etc. Mary was born into a poor family. Since her childhood she showed keen interest in sports.
She underwent intensive training at the Sports Authority of India, Khuman Lampak. According to Mary, “When I started, I had no encouragement and no support.
It was very difficult because I come from a poor family, and I had to struggle a lot for the first 4-5 years. I never had money to buy a proper kit or good shoes, and I used to travel long distances by bus or train.”

In a male dominated society where people considered boxing as a sport meant only for the boys Mary through her ability showed that girls were no less than boys. According to her, “There are so many rules in society about what a woman can or cannot do.
Boxing is not considered respectable for women and nobody believed I could be a boxing champion, not even my friends. Our neighbours said all kinds of things.
I wanted to show that not just men, but even women can do anything they want.” She is married to K Onler Kom and is a mother of three. She is settled in Imphal. 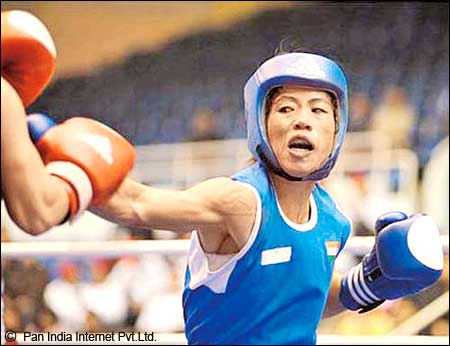 Mary com was born into an economically low background. She took to sports to support her family. Earlier she was an athlete. She switched to boxing after the success of fellow Manipur boxer Dingko Singh. She began boxing in 2000.
In 2000 she won her first title and Best Boxer at the first state level Invitation women’s boxing championship in Manipur. She won the gold in the seventh East India Women’s Boxing Championship in west Bengal and five subsequent Indian national Championship from 2000-2005.
She embarked on an international campaign which brought her many gold medals and honour. In the Asian women’s Championship at Hisar India on November 22, 2003, she defeated Chou Szu Yin of Chinese Taipei.
She won gold in the third Asian Women’s Championship at Taiwan. In her first AIBA World Women’s Boxing Championship in US in 2001 she won silver.

Mary Com was the first woman ever to receive India’s prestigious Arjuna award for her achievement in boxing in the year 2003. She was awarded the Padmashree in 2006 for her contribution in the field of sports. She was awarded with CNN-IBN & Reliance Industries’ ‘Real Heroes Award’ in 2008.
Then, in 2009 she was awarded the Rajiv Gandhi Khel Ratna Award as well as “People of the Year- Limca Book of records”. In the same year she was awarded Pepsi MTV Youth icon.
In her fourth successive World Amateur Boxing she won gold in 2008. The AIBA described her as “Magnificent Mary” then. In 2010 she was awarded the sportswoman of the year by Sahara sports Award.
6655