Nameirakpam Kunjarani Devi is an Indian weightlifter. She is a recipient of the Padmashree Award, Arjuna Award and Rajiv Gandhi Khel Ratna Award. She has more than 50 international medals to her credit.


Life and Education of Kunjarani Devi 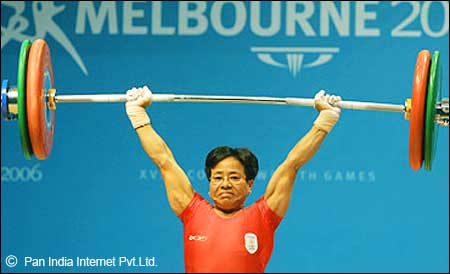 Nameirakpam Kunjarani Devi was born on March 1, 1968 at Kairang Mayai Leikai, Imphal in Manipur. She studied at Sindam Sinshang Resident High School at Imphal. Since her days in the school she took keen interest in sports. She did her graduation from Maharaja Bodha Chandra College in Imphal. Weightlifting was her first choice while she studied in the college. She joined the Central Reserve Police Force later. She was the captain of the Indian Police Team from 1996-1998. She is presently serving as the Assistant Commandant for the Central Reserve Police Force.

She was the winner of the bronze medal in the Asian Games at Beijing in 1990 and Hiroshima in 1994. She won one silver and two bronze medals in 1989 edition of Asian Weightlifting Championship in Shanghai and three silver medals in the 1991 edition of Asian Weightlifting Championship in Indonesia. She won gold medal at the 2006 Commonwealth Games held in Melbourne.


Awards and honour of Kunjarani Devi