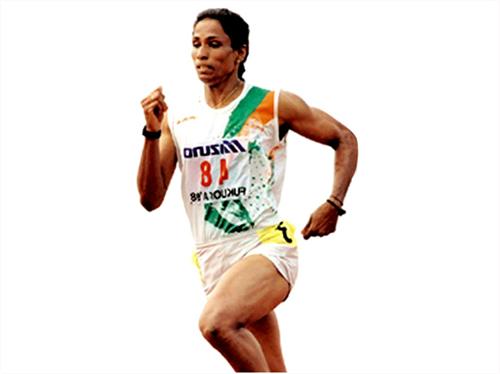 Pilavullakandi Thekkeparambil Usha or PT Usha was born on 27th June, 1964 in the village of Payyoli, Kozhikode District in Kerala. Usha was interested in sports since her childhood.
She has been associated with Indian athletics since 1979. PT Usha runs the Usha School of Athletics at Koyilandy in Kerala. She is employed as an officer in the Southern Railways. Presently Usha coaches young athletes at her training academy in Kerala.

A sports enthusiast PT Usha participated in the National School Games in 1979, where she was noticed by O M Nambiar, who later became her coach throughout her career. Usha debuted in the 1980 Moscow Olympics. In the 1982 New Delhi Asiad she got the silver medal in the 100m and the 200m.
At the Asian Track and Field Championship in Kuwait a year later she took the gold in the 400m with a new Asian record. Usha garnered 13 golds at ATF meets from 1983-89.
She finished first in the semi-finals of the 400 metres hurdles at the 1984 Los Angeles Olympics. Usha became the first Indian woman and the fifth Indian to reach the final of an Olympic event by winning her 400m hurdles semi-final.

In the 10th Asian Games held in 1986 at Seoul she won 4 gold medals and 1 silver medal in the track and field events where she created new Asian Games records in all the events in which she participated.
At the 6th Asian Track and Field Championship at Jakarta in 1985 she won five golds. Usha's six medals at the same meet is a record for a single athlete in a single international meet.