Pullela Gopichand is a renowned badminton player who is the second Indian after Prakash Padukone to win All England Open Badminton Championships 2001. 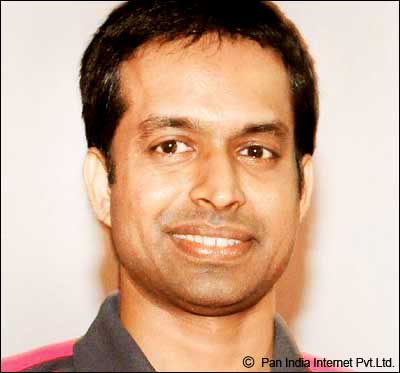 Pullela Gopichand was born on 16th November 1973 to Pullela Shubhash Chandra and Subbaravamma. In the initial years, Gopichand was more interested in playing cricket, but later his elder brother Rajashekhar initiated him to take up the game of badminton.
He was enrolled in St. Paul’s School and even when he was only 10 years old; his prowess in the game of badminton had become an issue to be discussed in the school. By the year 1988, Pullela Gopichand finished his schooling and made a mark for himself in the badminton circuit. He joined A.V. College in Hyderabad and graduated in public administration.
Gopichand initially received his coaching from S. M. Arif before Prakash Padukone accepted him in the BPL Prakash Padukone Academy. Gopichand also received training under Ganguly Prasad in the SAI Bangalore. He married fellow Olympian badminton player P. V. V. Lakshmi on 5th June 2002.

Pullela Gopichand suffered a ligament rupture in the year 1986 when he was 13. However, he won the singles and the doubles title in the inter school competition in the same year. After he recovered from the injury, he came back to form and reached the final round of the Andhra Pradesh State Junior Badminton Championship only to lose the title to his own elder brother.
He was the captain of the Indian Combined Universities badminton team during the years 1990 and 1991. He won his first National Badminton Championship in the year 1996 and won the title five times in a row till the year 2000.
He also won two gold medals and one silver medal in the National Games 1998 held in Imphal. In the same year, he led the state badminton team of Andhra Pradesh to win the prestigious Rahmatulla Cup.

Pullela Gopichand made his debut into international badminton in the year 1991 when he was selected to play against Malaysia. He has represented India in three Thomas Cup tournaments.
In the year 1996, he won the gold medal in the SAARC badminton tournament which was held in Vijaywada and then repeated the victory in the same tournament which was held in Colombo in the year 1997.
In the Commonwealth games, Gopichand won a silver medal in the team event and a bronze medal in the singles event. He was able to get the first big boost in the international level in the year 1997 when he participated in the Indian Grand Prix Tournament held in Delhi.
In the event, Gopichand continuously defeated most of the top seed players from across the world although he lost in the final match. In 1999, he won the Toulouze Open Championship in France and the Scottish Open Championship in Scotland.
In the same form, he emerged winner in the Asian Satellite tournament held in Hyderabad in the same year and lost in the final match of the German Grand Prix Championship.

However, the proudest moments for Pullela Gopichand came in the year 2001 when he recreated history by winning the prestigious 2001 All England Open Badminton Championships held in London.
This feat was till the accomplished by only one Indian, the legendary Prakash Padukone. Later, due to injuries, his game was affected and his ranking dropped to 126 in the year 2003. Gopichand currently runs the Gopichand Badminton Academy and is the main force behind the emergence of Saina Nehwal and Parupalli Kashyap.

Pullela Gopichand was awarded the prestigious Arjuna Award in the year 1999 by the Indian Government. In the year 2001 again, he was bestowed upon with the Rajiv Gandhi Khel Ratna Award, the highest Indian honor in the field of sports.
After he won the 2001 Championship, the Andhra Pradesh Government rewarded him with a cash prize and a plot in Jubilee Hills in Hyderabad.
In the year 2005, he was conferred the Padma Shri Award. He also received the Dronacharya Award on 29th August 2009 for his contribution to the Indian badminton as a coach.
In the year 2012, former Indian badminton player Sanjay Sharma and Shachi Sharma wrote a biography on him titled ‘Pullela Gopichand: The World beneath His Feet’.
4693