Colonel Rajyavardhan Singh Rathore is an ace Indian shooter who is first Indian to win a silver medal in the Olympics post-independence. Rathore’s silver was India’s best Olympic performance post Indian Independence.
In the 2002 Commonwealth Games in Manchester, Rathore won the Individual Gold Medal setting a new Commonwealth Games record. Currently Rathore is a Member of Parliament. In the 17th Lok Sabha he contested and won from Jaipur Rural seat. He is a member of Bharatiya Janata Party 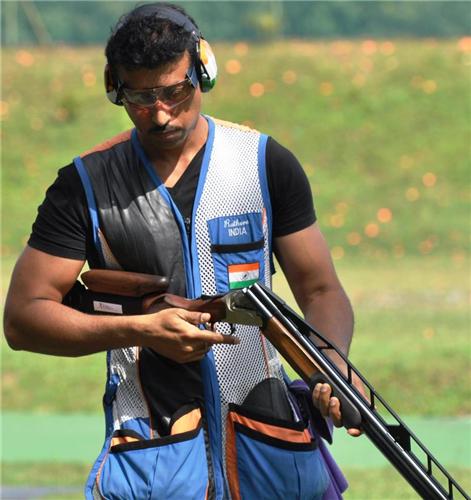 He was born on 29th January 1970 in Jaisalmer in Rajasthan. He belongs to the family of Bikaner.  He is an alumnus of the National Defence Academy in Pune.
Though he was nicknamed ‘Chilly’ yet he was a very soft spoken and humble person. Coming from a family with Army background, he grew up as a much disciplined child.
Rathore joined the Indian Army too and became a major of the Indian Army and he was also conferred with the ‘Sword of Honor’ from Indian Military Academy in the year 1990.

Rajyavardhan Singh Rathore won the silver medal in Men’s Double Trap in the 2004 Summer Olympics held in Athens. He was the first Indian to win individual silver after Norman Pritchard, who won two silver medals in the 1900 Paris Olympics.
Rathore’s silver was India’s best Olympic performance post Indian Independence since the other players could not go beyond a bronze medal. Rajyavardhan Rathore is credited for reviving the self belief of millions of Indian by his winning the silver medal.

In the 2002 Commonwealth Games in Manchester, Rathore won the Individual Gold Medal setting a new Commonwealth Games record. He also won the team gold medal with Moraad Ali Khan. Rathore then went on to successfully defend his Commonwealth Champion title by winning the Gold Medal in the Commonwealth Games held in Melbourne in the year 2006.
He also won the silver in the team event with Vikram Bhatnagar. Rathore also won gold medals in two World Cup Shooting Competitions, held in Sydney in 2004 and in Cairo in the year 2006. In the year 2006, he won the bronze medal in the World Cup final in Spain.
He was ranked number 3 in the world for most of the years 2003 and 2004/ later he briefly went on to be the world number 1 in early 2004 and world number 2 after the Athens Olympics. In the year 2003, he also won a World Championship bronze medal after a gap of nearly 40 years.
Rajyavardhan Singh Rathore is credited for winning the Asian Clay Target Gold Medal for four times in a row subsequently in the years 2003, 2004, 2005 and 2006.
He also holds an individual Bronze medal which he won in Doha in the Asian games in the year 2006. Rajyavardhan Singh Rathore is currently a Colonel in the Indian Army.

Rajyavardhan Singh Rathore was awarded the Khel Ratna Award for the year 2004-2005. He was also awarded the prestigious Arjuna Award for the year 2003-2004. Rathore is also a recipient of the Padma Shri, a civilian award from the Indian Government.
He also presented the Ati Vishisht Seva Medal which is a highly honorable military award for exceptional service by the President of India on behalf of the Indian Government. Rathore was chosen as the flag bearer for India during the 2008 Summer Olympics in Beijing in China.
He was also chosen as the flag bearer for India during the 2006 Commonwealth Games held in Melbourne in Australia. He was presented the Sword of Honour award, the Sikh Regiment Gold Medal award in the year 1990 and the Blazer award in the year 1989.

Rathore joined Bharatiya Janata Party after taking retirement from the Indian Army in 2013. He contested Lok Sabha elections and won from Jaipur Rural constituency. On 9 November 2014, he was sworn-in as the Minister of State for Information & Broadcasting, under the Narendra Modi government.
Later in 2017 he was appointed as the Minister of Sports. In May 2018, he became Minister of State (I/C) for Information & Broadcasting. Currently Rathore is a Member of Parliament in the 17th Lok Sabha.
Awards and recognitions
2005 – Padma Shri
2004–2005 – the Major Dhyan Chand Khel Ratna Award (Highest Sporting Honour of India).
2003–2004 – Arjuna Award
Ati Vishisht Seva Medal (AVSM), military award for exceptional service, presented by the President of India on behalf of the Government of India.
Rathore was the chosen flag bearer for India during the 2008 Summer Olympics in Beijing, China.
Rathore was the chosen flag bearer for India during the 2006 Commonwealth Games in Melbourne, Australia
1990 – the Sword of Honour (For the Best All Round Officer Cadet at the Indian Military Academy).
1990 – the Sikh Regiment Gold Medal (For the Best Sportsmen at the Indian Military Academy).
1989 – the "Blazer" (Highest sports award at the National Defence Academy, Pune, India). along with various military award.
7012