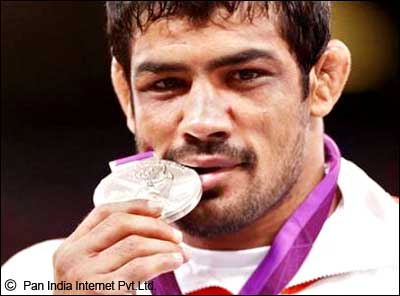 Sushil Kumar is an Indian World Champion wrestler who brought laurels to the country through his honorary achievements and successful victories at an international level. Sushil Kumar created history when he became the first Indian to win a gold medal in the FILA 2010 World Wrestling Championships held in Moscow on 12th September 2010. Sushil Kumar is the first Indian to win back to back individual Olympic medals by winning a silver medal at the 2012 London Olympics and a bronze medal at the 2008 Beijing Olympics.

Sushil Kumar Solanki is a Jat hailing from the village of Baprola in South Delhi. He was born on 26th May 1983 in Baprola. His father Siwan Singh was a DTC bus driver and mother Kamala Devi who is a housewife. He was encouraged to take up wrestling by his cousin Sandeep and his father who was a ‘pehelwan’ (wrestler) himself. Sushil Kumar trained at the akhada (wrestling school) in the Chhatrasal Stadium from the age of 14 years. He is presently employed by the Indian Railways as an Assistant Commercial Manager. 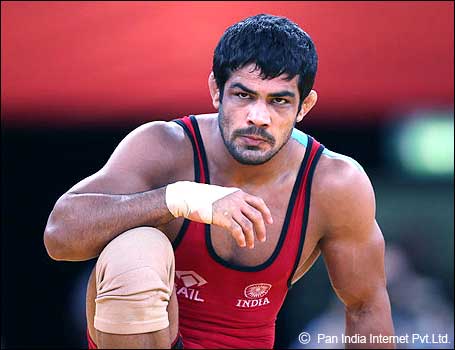 Sushil Kumar was trained at the akhada by Indian pehlwans Yashvir and Ramphal and later he was trained by Arjuna awarded Satpal and then at the railways camp by Coach Gyan Singh. Sushil Kumar endured tough training conditions including sharing a mattress with fellow wrestler and also sharing a dormitory with twenty others. Sushil Kumar became a state champ at the age of 18. His first success came at the World Cadet Games in the year 1998 where he won the gold medal in his weight category. This was soon followed by gold in the Asian junior Wrestling Championship in the year 2000.

During the 2008 Beijing Olympics, in the bronze medal match on 20th August 2008, he beat Spiridonov of Kazakhstan. He then disclosed that he had no masseur during the three bouts he won within a span of 70 minutes to take the bronze. Kartar Singh, the team manager also a former Asian Games medalist acted as a masseur for him.

Sushil Kumar created history when he became the first Indian to win a gold medal in the FILA 2010 World Wrestling Championships held in Moscow on 12th September 2010.

Sushil Kumar won the gold medal in the 2010 Commonwealth games which was held in Delhi on 10th October 2010. In the finals, he defeated Heinrich Barnes of South Africa in the 66 kg competition. The South African wrestler found it difficult to endure more than three and half minutes in front of Sushil Kumar. In return, the referee has to stop the bout in the second round.

Sushil Kumar has been chosen as the India’s flag bearer for London Olympics opening ceremony on 27th July. He won the silver medal in the 66 kg free style wrestling after losing in the final to Tatsuhiro Yonemitsu of Japan. Sushil Kumar also made television appearance in a reality show Roadies 9 in the year 2012.

Sushil Kumar was awarded the prestigious Arjuna Award in the year 2005. He was also awarded the Rajiv Gandhi Khel Ratna, India’s highest honor for sportsperson in the year 2009. He was also awarded a number of cash prize awards by different state governments and organizations for his respective wins in the Olympics. On 3rd October 2010, Sushil Kumar was the final baton bearer who handed the Queen’s Baton to Prince Charles in the Queen’s Baton Relay for the 2010 Commonwealth Games Opening Ceremony.