Vijay Kumar is a sport shooter from India who brought honors to India in the Summer Olympics 2012
by winning silver medal in the 25 meter rapid fire pistol. Olympic Gold quest is an initiative which supports Vijay Kumar in his field of work.

Vijay Kumar was born on 19th August 1985 in Harsour village of Hamirpur district of Himachal Pradesh. He is presently working as a serving subedar in the Dogra Regiment (16th Battalion) of the Indian Army.
He is currently supported by the Olympic Gold Quest initiative and has been posted in the army Marksmanship Unit (AMU) in Mhow since the year 2003 where he is being coached by the Russian Pavel Smirnov. 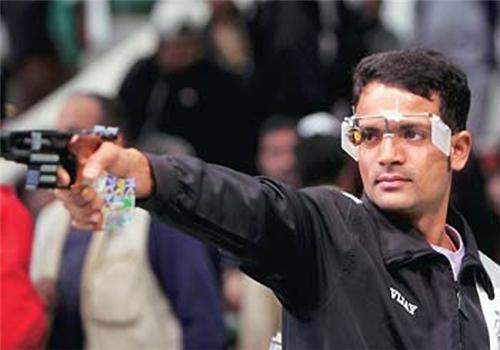 Vijay Kumar won two gold medals in the 2006 Commonwealth Games. He won one medal in the individual 25 meters rapid fire pistol and another in the pair’s competition in the same event together with Pemba Tamang.
In the same year, he won a bronze medal in the Asian Games despite finishing fourth because of a rule which prevented China from winning all the three medals.
In the next year, he finished second in the Asian Championship in the 25 meter center fire pistol. Vijay Kumar also won a silver medal in the 2009 ISSF World Cup Beijing in the rapid fire pistol event where he was defeated by Keith Sanderson.

In the 2012 London Olympics, Vijay Kumar won the silver medal in the 25 meter rapid fire pistol. He finished with an average score of 9.767. Vijay Kumar had a score of 293 with 7 inner 10s in the first stage.

Vijay Kumar was awarded the prestigious Arjuna Award in the year 2007. He was also awarded many laurels and cash awards after he won the silver medal in the 2012 London Olympics.