Yogeshwar Dutt is an Indian wrestler who brought laurels to the country through his honorary achievements and successful victories at an international level. A Rajiv Gandhi Khel Ratna awardee, Yogeshwar Dutt won bronze medal in the 2012 Summer Olympics in London.

Yogeshwar Dutt was born on 2nd November 1982 in Bhainswal Kalan in Sonipat district of Haryana. His parents were teachers. Yogeshwar started wrestling from a very young age of 8 years. He was inspired by Balraj Pehlwan, who hails from his native village and was trained under the guidance of coach Ramphal. 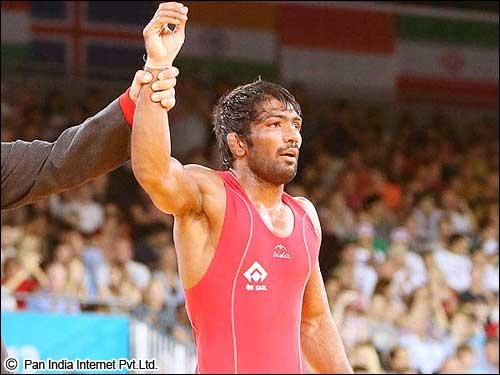 Yogeshwar Dutt won the gold medal in the 2003 Commonwealth Wrestling Championship. In the Athens Olympics held in the year 2004, he took part in wrestling in the men’s freestyle 55 kg and stood in the 18th rank. During his preparation for the 2006 Asian Games, Yogeshwar lost his father on 3rd August 2006, just nine days before he boarded a flight to Doha for the Asian Games. He also sustained a knee injury during that time. However, despite the emotional and physical trauma, he managed to win the bronze medal in the 60 kg category in the 15th Asian Games in Doha.

Yogeshwar also represented India in the 60 kg freestyle wrestling in the 2008 Beijing Olympics. In the first round of the game he got a bye. Then in the pre- quarterfinals, he beat Baurzhan Orazgaliyev of Kazakhstan. Yogeshwar then lost to Kenichi Yumoto of Japan in the quarterfinals of the 60kg freestyle event. In the 2008 Beijing Olympics, he was ranked 9th.  Yogeshwar earned his place for the 2008 Olympics by winning gold in the 2008 Asian Championship held in March 2008 in Jeju City in South Korea.

In the 2010 Commonwealth Games in Delhi, Yogeshwar overcame a career-threatening knee injury to go on and win the 60 kg title. He went past Farzad Tarash of Australia, Marius Loots of South Africa and Sasha Madyarchyk of England to reach the finals and with his performance won the gold medal for India.

Earlier, Yogeshwar Dutt qualified for the 2012 Olympics by winning a silver medal in an Asian qualification tournament held in Astana in Kazakhstan where he lost to Mahmoud Masoud Esmaeilpour Jouybari of Iran.

In the London Olympics, he initially lost to B Kudukhov of Russia and was knocked out from the pre-quarterfinal round. However, he got a chance to contest in the repechage rounds as Kudukhov reached the finals of the event. In the first repechage round, he went on to beat Franklin Gomez of Puerto Rico. In both the matches, he was lucky to win the toss to earn a clinch position. He then beat Mahmoud and finally later beat his North Korean opponent to win the bronze medal.

The Haryana Chief Minister has announced a cash reward of one crore rupees to Yogeshwar Dutt for his bronze medal win in the 2012 London Olympics. He has also been honored with Rajiv Gandhi Khel Ratna Award 2011-2012.