Abu'l Hasan Yamīn ud-Dīn Khusrau (1253–1325 AD) was a musician, scholar and poet of India. His genres included ghazal, khayal, qawwali, tarana, rubai. He was an iconic figure in the cultural history of India. Khusro represented one of the first Indian peoples with a multi-cultural or pluralistic personality through his enormous literary output. 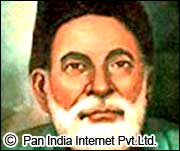 India. His father Amir Sayf ud-Din Mahmud was a Turkic officer. In 1260 after the death of his father he went to Delhi with his mother.

He also participated as a soldier in the war against the invading Mongols. He was taken as a prisoner but was later released.

He was a disciple of Nizamuddin Auliya of Delhi. He represented one of the first Indian peoples with a multi-cultural or pluralistic personality through his enormous literary output.

He died in 1325. His tomb is next to that of his master in the Nizamuddin Dargah of Delhi.

He was a royal poet. He was associated with the royal courts of more than 7 rulers of the Delhi Sultanate. Khusro has written many playful riddles and songs. He is famous particularly in the Northern India and Pakistan. The poetry of Khusro is still sung at Sufi shrines throughout India and Pakistan.

He wrote poetry in Persian and Hindavi. He could follow all styles of Persian poetry. He used 11 metrical schemes with 35 distinctive divisions. He has written ghazals, masnavi, qata, rubai, do beti and tarkibhand. In 1271 he compiled his first “divan” of poetry, “Tuhfatus-sighr”.

He got his first job as a court poet with king Balban’s nephew Malik Chhajju in 1272. He later started working with the son of Balban. His “mathnavi” (poems) include “Qiranus Sa’dain”, “Miftahul Futooh”, “Duval Rani-khizr Khan”, and “Noh-Sepehr” among others.

His collection of poetry include “Tuhfa-tus-sigjr”, “Wastul-hayat”, “Ghurratul-Kamaal”, “Baqia-Naqia”, . He wrote “Khamsa”. His work was one of the great classics of Persian poetry. Khusro’s verses are still fresh and relevant.

He has made significant contribution to the development of music in India. Khusro is regarded as the father of qawwali. He was the originator of the “khayal” and “tarana” styles of music. The invention of the “tabla” is also attributed to him.

He introduced the tabla as a split version of the “Pakhawaj”. According to popular lore he also introduced the “sitar”. He has made significant contribution to the development of ghazal in India. He is credited with enriching Hindustani classical music by introducing Persian and Arabic elements in it.

He was a prolific writer. He was the writer of both tender and highly involved prose. His most notable works include “Ejaaz-e-Khusrovi”, “Tughlaq nama”, “Khazain-ul-Futooh”, among others. Khazain-ul-Futooh (The Treasures of Victories) has been one of his more controversial books, in prose (1311–12).

For biographies on other Writers and Poets, click here