Amrita Pritam is one of the prominent Punjabi poets of the twentieth century whose works are immensely popular among the readers.
Pritam is one of the most important voices in Punjabi literature. She also actively participated in social work. She is the first woman to win the Sahitya Academi Award in 1956. 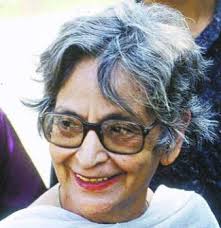 Amrita Pritam was born as Amrita Kaur on 31st August, 1919 in Gujranwala district of Punjab (in present day Pakistan). Her father, Kartar Singh Hitkari was a school teacher, poet and a scholar of Braj Bhasha. Her mother died when she was only eleven years old which left her under the nurture and care of her father.
They moved to Lahore where she continued to live till her migration to India in 1947. In order to escape from her loneliness, Amrita used her skills at writing at a very early age. Her first anthology of poems titled Amrit Lehran was published in 1936 at the age of sixteen.
In the same year, Amrita was married to Pritam Singh, an editor. In the following years half a dozen collections were published between 1936 and 1943. This great personality breathed her last on 31st October in 2005 at the age of sixty-five.

Career and works of Amrita Pritam

Amrita became a part of the Progressive Writer’s Movement, whose effect was clearly visible in her collection Lok Peed (1944). She actively participated in social work where she contributed in establishing the first Janta Library in Delhi.
She has also worked at Lahore Radio Station for some time before the Partition took place. She also worked in the Punjabi service of All India Radio, Delhi till 1961.

Amrita Pritam is one of the most important voices in Punjabi literature. As a writer, Amrita has written introductions of many books of Osho such as Ek Onkar Satnam.
She wrote on spiritual themes producing works like Kaal Chetna and Agyat Ka Nimantran. The tiles of her autobiographies are Kala Gulab (1968), Rasidi Ticket (1976) and Aksharon kay Saayee.

Amrita Pritam for her literary contribution has been bestowed with several prestigious awards. She is the first woman to win the Sahitya Academi Award in 1956 for her long poem; ‘Sunehray’ and also the first recipient of Punjab Rattan Award.
She received the Bharatiya Jnanpith award for Kagaj te Canvas in 1982. Amrita also received the Padma Shri in 1969 and Padma Vibhusan in 2004. She has also received honorary degrees from several universities such as Delhi University (1973), Jabalpur University (1973) and Vishwa Bharati (1987).

Amrita has also been awarded International Vaptsarov Award from the Republic of Bulgaria (1979). She was nominated as a member of Rajya Sabha in 1986-92. She was also awarded by Pakistan’s Punjabi Academy towards the end of her life.
5754