Banikanta Kakati is one of the well known literary figures and a scholar of Assamese language. He has made immense contributions to the Assamese language in terms of his literature, linguistics and comparative religion. 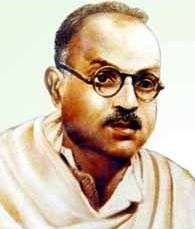 Banikanta Kakati was born on 15th November 1894 in Barpeta of Assam to Lalitram Kakati and Lahobala Kakati. He was the second son of his parents and showed signs of geniuses from his early childhood.
It is said that Banikanta Kakati could memorize the whole of Panini during his school days. Banikanta Kakati passed out his matriculation under Calcutta University. In the year 1913, he stood first among all the candidates in the intermediate from Cotton College.
He passed out his M.A in English literature from Presidency College Calcutta in the year 1918. Later on he secured the foremost position in M.A in English in 1923. Banikanta Kakati passed away on 15th November 1952 after his health broke after the demise of his beloved wife Kanaklata in the same year.

Banikanta Kakati joined Cotton College as a professor of English in 1918 and worked there until he became the principal of the college in 1947. He joined the Gauhati University in the year 1948 as the Dean of the Faculty of Arts and Head of the department of Assamese.
After Banikanta Kakati joined Cotton College as a lecturer in 1918, he took up the study of Shrimanta Sankardeva and old Assamese literature. While he was studying MA in English, he obtained doctorate for his thesis ‘Assamese: Its Formation and Development in 1935’.
The publication of this thesis in 1941 was a foothold for the Assamese people who were struggling to establish the identity and provenance of their mother tongue. Banikanta Kakati’s interest in language proliferated over the years, although his mind was straying into different other fields.
He made an intense study of the Kalita caste and incorporated his findings in the ‘Kalita Jatir Itibrita’. His other writing ‘Mother Goddess Kamakhya’ dealt with socio-religious issues prevalent in ancient Kamarupa.
By the end, Banikanta Kakati turned his interest to Indian mythology and his Vaishnavite myths and legends has been acclaimed as ‘one of the every few studies of the religious scene in India produced by our scholars that deserve reading and pondering over’.

Dr. Banikanta Kakati was also one of the greatest critics of his time. His ‘Purani Asomiya Sahitya’ provides the axes for the appreciation of Vaishnavite literature of mediaeval Assam. He was regarded as the most capable interpreter of religious mysticism in the poetry of the Nam Ghosha.
Banikanta Kakati also raised the perennial issue of a possible tension between poetry and belief. Banikanta Kakati being a scion of Romantic Age, he sketched the critical background for the twentieth century Assamese romantics.
Banikanta Kakati wrote books both in English and Assamese. His writing made a distinct mark achievement in the history of Assamese scholarship.
His writings in English include ‘Assamese: Its formation and development’, ‘Mother Goddess Kamakhya’, ‘Life and Teachings of Sankardeva’ and ‘Vaishnavite myths and legends’. His Assamese writings include ‘Purani Kamrupa Dharmar Dhara’, ‘Purani Asamiya Sahitya’, ‘Kalita Jaatir Itibrita’, ‘Sahitya Aru Prem’ and ‘Pakhila’.
14832