Chandra Prasad Saikia (1927-2006) was a renowned freedom fighter, a novelist, journalist, book publisher and commentator from Assam. He is widely recognized for his outstanding and pioneering contribution to Assamese literature and journalism. 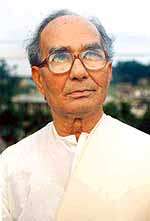 After returning from Calcutta, Chandra Prasad Saikia served in The Assam Tribune for a brief period. From the year 1963, he headed the bi weekly ‘Asom Batori’ as an editor for four years. He then simultaneously edited a monthly magazine called ‘Monideep’ for two years before editing another magazine ‘Asomiya’ from the year 1968-70.
He also served as the Secretary of the Assam Publication Board for a period of 19 years from the year 1967 to 1986. During his tenure there, he did the yeoman service of collating, restoring and publishing many rare Assamese manuscripts.
Chandra Prasad Saikia was also the founder editor of the monthly Assamese literary magazine ‘Prakash’ from the year 1974 to 1986. In the later years, Saikia’s visionary zeal for ‘literary journalism’ was realized when he took charge as the founder editor of an Assamese daily newspaper named ‘Natun Dainik’.
He continued to serve there as an editor until the year 1993 when he left to become the founder editor of another Assamese literary magazine ‘Gariyoshi’.

Chandra Prasad Saikia was the president of the Assam Sahitya Sabha between the years 199-2001. He has also authored 21 books that remained best sellers. His books have been translated into English and other Indian languages.
He was the only editor who edited seven newspapers and journals in Assam. His biggest contribution was promoting a new genre of creativity through literary magazines.
He also helped preserve Assamese customs and traditions which were on the brink of extinction. He was also a mentor and a promoter of young journalists and authors. As a novelist, Chandra Prasad Saikia’s modern interpretation of Karna created a literary storm.

Chandra Prasad Saikia was awarded many titles and recognitions in state and national level. He was awarded the Sahitya Akademi Award for his novel ‘Maharathi’, the Williamson Magor Award, the Publication Board Award for his novel ‘Torae Morae Alokare Yatra’ and the Katha Award for three consecutive years from 1996 to 1998 for ‘Gariyoshi’.
He was also conferred the Padma Bhushan Award by the Indian Government in the year 2007 for his outstanding contribution to the society.
7169