Chetan Bhagat is a renowned Indian author, columnist and a speaker. He has five best selling novels to his credit which have remained best sellers since their release. 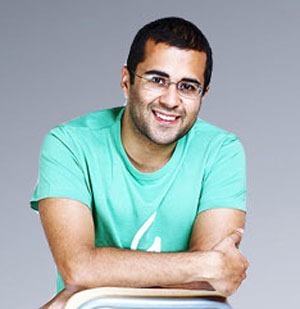 Chetan Bhagat was born on 22nd April 1974 in New Delhi in a middle class Punjabi family. His father was in the army and his mother was a government employee in the agricultural department. Chetan Bhagat completed his education mostly in Delhi. He attended the Army Public School, in Dhaula Kuan, New Delhi and then studied mechanical engineering in the Indian Institute of Technology (IIT) in the year 1995 in Delhi. He then graduated from the Indian Institute of Management (IIM) in the year 1997 where he was named the ‘Best Outgoing Student’. Chetan Bhagat met his wife, Anusha Suryanarayan, a Tamilian in IIM Ahmadabad. They married in the year 1999. The couple is parents of twin sons, Shyam and Ishaan. The love story of Anusha and Chetan Bhagat was the inspiration for the book 2 States: The Story of My Marriage.

After graduation, Chetan Bhagat worked as an investment banker in Hong Kong where he worked for 11 years. He then shifted to Mumbai to pursue his passion for writing and to give full time to writing. Chetan Bhagat has written five books namely ‘Five Point Someone-What Not to do at IIT!’ (2004), ‘One Night @ the Call Center’ (2005), ‘The 3 Mistakes of My Life’ (2008), ‘2 States: The Story of My Marriage’ (2009) and ‘Revolution 2020: Love, Corruption, Ambition’ (2011). All his books have been bestsellers and two of them have inspired Bollywood films.  His first three novels were written during his tenure as an investment banker.

Chetan Bhagat, an alumnus of IIT Delhi and IIM Ahmadabad, is seen more as a youth icon than an author. He also favored the forming of a system similar to the Lokpal as early as January 2011 through his articles. He writes op-ed columns for English and Hindi newspapers including leading papers like The Guardian, The Times of India and Dainik Bhaskar, focusing on youth, career and issues based on national development. Chetan Bhagat is also a motivational speaker and has given talks in leading multinational corporations and other institutions. he also was a judge on the Star News TV reality show ‘Star Anchor Hunt’. He has given inspirational speeches like ‘Spark’, a speech given at the orientation program for the new group of MBA students in Symbiosis, Pune and another speech ‘Becoming One With the World’, a speech given at the HT leadership Summit in Delhi. He also gives speeches on programs organized by newspapers and media houses apart from writing columns for the same. He also expresses his views on current trend of the society through the micro-blogging site Twitter.

Chetan Bhagat was indulged in a controversy over a movie. When the film 3 Idiots was released, Chetan Bhagat was unhappy over not giving credit for the film’s story, which was based upon his first novel ‘Five Point Someone-What not to do at IIT!’ According to Chetan Bhagat, the film has taken more from the book than the filmmakers had led him to believe. However, the film director Rajkumar Hirani said that Bhagat has been given his due credit according to the contract. Hirani threatened to take legal action against Chetan Bhagat. Bhagat too accused Hirani of not showing him the final script as per the contract, but Hirani denied that. The protagonist of the film Aamir Khan initially said that the screenplay was original, but later he kept himself away from the controversy.

Awards and Recognitions of Chetan Bhagat: