Dwijendra Mohan Sharma was a renowned writer and lyricist of Assam. His compositions consist of as many as 500 evergreen hits. He has been termed as the “Man with Melody in his pen” by the Daily Telegraph. 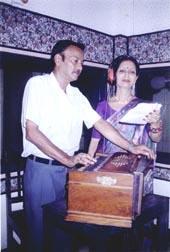 Dwijendra Mohan Sharma was married to Beauty Sharma Baruah, a popular folk, Indian classical, Ghazal and Bhajan singer from Assam who has sung several compositions of her husband. Dwijendra Mohan Sharma had been a teacher at Arya Law College.
Dwijendra Mohan Sharma composed lyrics for several Assamese films. He and Jayanta Hazarika came together for the evergreen “Alo Bhuban Hayralu Kinaba” that waffled into the hearts of music connoisseurs.  “Mah Halodhire Nowale Dhuwale” in the voice of his wife Beauty Sharma Baruah and “Hey Udash” by Baikuntha Gogoi are the most popular Assamese songs till today.
Singers from the world of Hindi films like Alka Yagnik, Anuradha Paudwal and Kavita Krishnamurty have lent their voice to his compositions. Some of his other popular tracks are “Jhilmil Jon Jwole Kopalot”, “Porichoybihin Jojabor Nogori’, “Sipare Jamunar Bali”.
Two of his most acclaimed books on songs are “Mur geet” and “Aanantorongor Alap”. In 1988 the children learning music at the Alkananda Sangeet Vidyalaya of Beauty Sharma Baruah won multiple awards for their songs sung in the album “Umola Ghoror Geet” which was composed by Dwijendra Mohan Sharma.
He held two posts of news editor while at Doordarshan, Guwahati. He took his last breath on May 6 2006 at the age of 58 and died of heart attack. After his death his wife published a book on children’s songs in 2007 namely “Umola Ghoror Geet”.
This contained 56 songs written by Sharma.  His wife has sung 300 songs written by the lyricist. After the death of her husband she wrote a composition dedicating it to Sharma.
1223