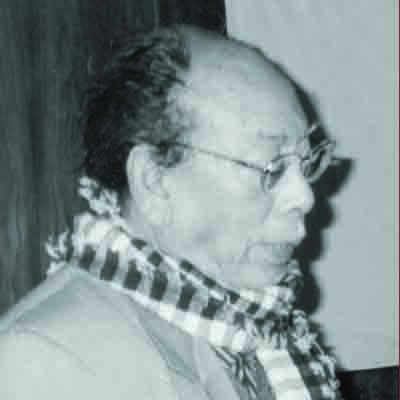 Elangbam Nilakanta Singh (1927-2000 ) was a writer, poet and literary critic of Manipur. He is known for making immense contribution to Manipuri literature. He received Sahitya Academy Award for his poem “Tritha Yatra” in 1987. He was also the recipient of the Padmashree Award in 1999.

Elangbam Nilakanta Singh was born on October 4, 1927 at Keisamthong Elangbam Leikai, Imphal in Manipur. He was born to Elangbam Bokul Singh and Lakhi Devi. He was the eldest of the siblings. His father was a teacher by profession.
He did his primary schooling in Churachandpur. He passed his matriculation exam in 1945 from Johnston School at Imphal. He completed his IA from Murarichand College Sylhet (now in Bangladesh). He did his BA, MA, and LLB from Gauhati University.
After completing his studies he joined DM College as a lecturer in Philosophy. He retired as director of Social Welfare, Art and Culture Govt of Manipur in 1986. He died on February 11, 2000.

Elangbam Nilakanta Singh was a writer, poet, critic and thinker. His literary sensibility as a poet is remarkable. He made immense contribution to poetry writing in Manipur. He received Sahitya Academy award for his poem “Tritha Yatra” in 1987.
His poem “Manipur” written in 1948 was during a period of change from a new order in the special set up of Manipur. His notable poems include “Achaiba Lei”, “Chatlaseene Kadaidano Ebani”, “Matamgi Wakhal”, “Tritha Yatra” etc.

Elangbam Nilakanta Singh was a vastly read man in philosophy, theology, and world of literature. He read extensile the works of Rabindranath Tagore and Sri Arobindo. He was influenced by a several writers, philosophers and poets. He made a proper assimilation of the thoughts of different writer in his works.

Elangbam Nilakanta Singh has been associated with many literary, cultural and social organizations. He was associated with the cultural forum Manipur, Naharol Sahitya Premi Samity, IN Dance Academy etc.

Elangbam Nilakanta Singh received Sahitya Academy Award for his poem “Tritha Yatra” in 1987. He was also the recipient of the Padmashree Award in 1999.
15257