Known as the ‘Bidrohi Kobi’ or the rebel poet Kazi Nazrul Islam was a renowned Bengali poet and musician. He was a mass-oriented revolutionary literary figure. 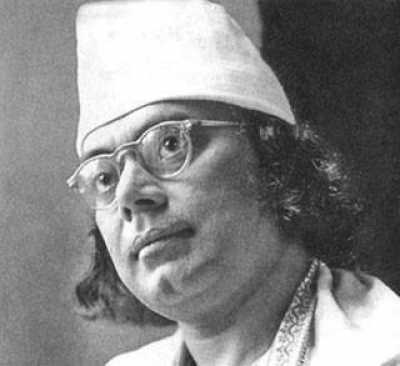 Nazrul Islam was born in 1899 into a Muslim quazi family in the village of Churulia near Asansol in Burdwan district of India. He was born to Kazi Faqeer Ahmed and Zahida Khatun.Nazrul received religious education in the Maktab and Madrassa. He gained knowledge on poetry, drama and literature while he worked for theatrical groups. He wrote songs and poems for the play and musicals. Nazrul was an avid learner. He learnt Bengali literature, Sanskrit, Persian, Hindustani classical music and the Puranas which also showed on his works. Nazrul also served in the British army. He was arrested many a times for his activism in the freedom struggle. He wrote many poems and songs during his stay in the prison. Nazrul was a critique of the Khilafat struggle and the Indian National Congress. He encouraged people to agitate against the British rule in India.

He was a member of the Bangiya Mussalman Sahitya Samiti. He was regular in the clubs for Calcutta writers, poets and intellectuals. He had close association with poet Rabindranath Tagore. Nazrul married Pramila Devi in 1924. Towards the later part of his life Nazrul suffered from mental ailments. He was transferred to various hospitals for treatment but to no avail. With the consent of the Indian government the newly formed nation of Bangladesh brought Nazrul to live in Dhaka. In 1976 he was accorded the citizenship of Bangladesh. Nazrul died in 1976 in Bangladesh.

Nazrul Islam is a highly commemorated poet in India. He was an extraordinary and most versatile poet, lyricist and writer. He holds a world record in terms of number of songs written and composed. His primary contributions are in the field of poetry and music, including classical music. He was also writer of novels and prose.

He was a voice of Islam proclaiming universal values, peace, freedom, justice, harmony and cooperation. His writings were based on the theme of love, freedom and revolution. He was a writer of short stories, novels and essays but was best known for his poetry. Nazrul’s ideas gained great popularity across India. Nazrul is acclaimed for composing the very first ghazals in Bengali language. He introduced Islam into the Bengali music tradition. He composed number of Shamasangeet, bhajan and kirtan. He also worked as a lyricist, composer and music director for His Masters Voice Gramophone Company. His songs were broadcast across the country.

Through his writings Kazi Nazrul infused among the countrymen a sense of national feeling. He was against all forms of oppression. His writings were hugely in opposition to fascism and oppression. He was a revolutionary who serve the nation through his revolutionary writings. His works such as “Bidrohi”, “Bhangar gaan”, “Dhumketu” portray a sharp sense of revolution against the British rule in India. He said “Even though I was born in this country (Bengal), in this society, I don’t belong to just this country, this society. I belong to the world.”

In his writing could be found portrayed of the equality for women. He supported the uplift of women. He was an exponent of humanism as well. He is regarded for his secularism in writing. His works also had deeper religious theme attached to them. Nazrul’s fame reached its zenith with his work “Bidrohi”, the most popular of his works. Some of the most notable works of Nazrul include Pralayollas, Agniveena, Sanchita Byather Da, Yugbani, Dhumketu,  Doridro, Barangana, Nari, Dolan Champa, Bisher Banshi, Rikter Bedan, bandhan Hara, Jhilmil, Joog Bani etc.

The collective compositions of the songs of Kazi Nazrul are known as Nazrul geeti. Nazrul wrote and composed music for 4,000 songs. Nazrul Geeti is widely popular in West Bengal.  Nazrul wrote extensively on the downtrodden class of society. He was opposed to the socio economic norms and political system thereby bringing upon misery to the people. A sphere of his music is called “mass music”. Most of his songs were based on classical ragas. His songs also had folk tunes attached to them. He also wrote for children. His songs were mainly based on baul, jhumur, santhali, bhatiali, bhaoaia etc.

Nazrul acted in the role of narada in a film and composed the songs for the film and sang as playback singer. He worked as the music director of the film ‘Vidyapati. For the film ‘Siraj-ud-Dullah’ he wrote songs and directed the music. Nazrul worked in Calcutta radio station also. Nazrul was also a prolific journalist. He published the weekly ‘Langal’ and was its chief editor. He worked as chief editor for ‘Nabayug’.

Nazrul Islam is recognized as the national poet of Bangladesh. He was awarded the Jagattarini Gold Medal by the University of Calcutta in 1945. In 1960 the government of India honoured him with the Padma Bhushan.

The Bangladesh government awarded him with the Ekushey Padak. He was awarded the D Lit by the University of Bangladesh. Nazul Endowment is a scholarly institution which preserves his works. The Bangladesh Nazrul Sena is an organization which works for education of children throughout the country.