Kiran Desai is one of the prominent woman writers in the modern world. She is popular for her novel "The Inheritance of Loss" which won the Man Booker Prize in 2006. 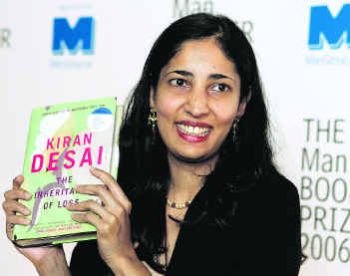 Kiran Desai was born on 3rd September in the year 1971 in Chandigarh. She is the daughter of Anita Desai, herself a novelist and Ashwin Desai. At the age of fourteen, Kiran left India and resided with her mother in England before moving to the United States. Kiran did her schooling in Massachusetts and studied creative writing from Bennington College, USA, Hollins University, Virginia and Columbia University. She first came to literary attention in 1997 when she was published in the New York and in Mirrorwork, an anthology of 50 years of Indian writing edited by famous novelist Salman Rushdie in Strange Happenings in the Guava Orchard.

Kiran Desai became instantly popular when her novel "The Inheritance of Loss" published in 2006 won the Man Booker Prize in 2006. The plot revolves around the inhabitants of a town situated in the north-eastern Himalayas. She took a gap of two years after completing her studies to write her other book, "Hullabaloo in the Guava Orchard" which was published in 1998 by Faber and Faber.

Awards and achievements of Kiran Desai

Apart from being bestowed with the Man Booker Award in 2006 for her novel "The Inheritance of Loss", Kiran Desai has also been awarded with National Book Critics Circle Fiction Award in 2006. The book has been shortlisted for Orange Prize for Fiction in 2007, for Kiryiama Pacific Rim Book Prize in 2007, and for British Book Awards Decibel Writer of the Year in the same year. For her other book Hullabaloo in the Guava Orchard, she has been awarded Betty Trask Award.