Mahasweta Devi (1926 – 2016) is an eminent Indian writer and social activist. She is one of the foremost literary personalities and best-selling Bengali author of short fiction and novels. 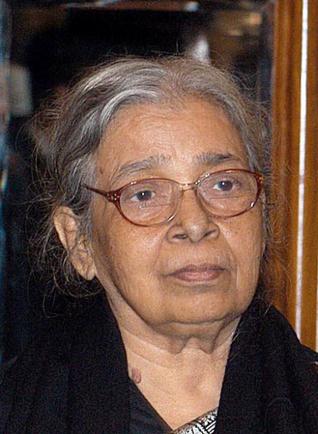 Mahasweta Devi was born on 14 January 1926 in Dhaka to a Hindu- Brahmin family. Her father, Manish Ghatak was a renowned poet and novelist belonging to the Kallol era. Her mother Dharitri Devi was a writer and a social worker.
Mahasweta did her first schooling at Dhaka but later had to move to West Bengal after the Partition took place. She then pursued B.A in English at Vishvabharati University in Santiniketan and then completed her M.A from Calcutta University. Mahasweta was married to Bijon Bhattacharya, a renowned playwright but later got divorced in 1959.
She is the mother of Nabarun Bhattacharya, a famous present day novelist in Bengal. In 1964 she taught at Bijoygarh College but later gave up her job to pursue her writing.
She then worked a journalist and as a creative writer. As a social activist Mahasweta Devi has worked for the tribal communities in the interior regions of Bihar, Madhya Pradesh and Chhattisgarh.
She has raised her voice against the brutal oppression of the ignorant tribal people by the exploitive upper class landowners. She has been working against the industrial policy of the West Bengal government, openly criticizing the confistication of large fertile agricultural land from the poor farmers.

Mahashweta Devi is one of the prolific writers of India. She is a writer of novels, short fiction, children’s stories and plays. She has made immense contribution to the literary and cultural history.
She is a deeply political social activist working for the tribals. Her articles have appeared regularly in the Economic and Political Weekly Frontier and other journals.
Some of the books written by Mahasweta Devi are The Queen of Jhansi, Hajar Churashir Ma, Dhowli, Dust on the Road, Titu Mir, Bashai Tudu, Imaginery Maps, Aranyer Adhikar, Agnigarbha, Chotti Munda evam Tar Tir, Dust on the Road, Our Non-Veg Cow, Till Death Do Us Part, Old Women, Dakatey Kahini, Ek-kori's Dream, The Book of the Hunter, Outcast, Draupadi, In Other Worlds and Rudaali among others.
Two of her books titled Hajar Churashir Ma and Rudaali were made into films in 1993 and 1998 respectively. Mahasweta Devi has written in her mother tongue, Bengali for Bortika, a literary magazine.

Devi suffered a major heart attack and was admitted hospital later she died of multiple organ failure on 28 July 2016, aged 90.


Awards and achievements of Mahasweta Devi