Maharaj Kumari Binodini Devi  (1922-2011) was an Indian writer from Manipur. She was a novelist, short story writer, essayist, lyricist and script writer. She was a member of the erstwhile royal family of Manipur.
The contribution of Binodini Devi is crucial for she maintained a balance teen the royalty and the modern art.  She was a recipient of the Padmashree. 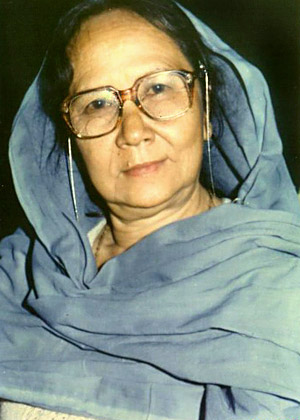 MK Binodini Devi was born on February 6, 1922 in Manipur. She was also known as Princess Wangolsana. She was born into a royal family. She was born to Maharaja Churachand Singh and Maharani Dhanamanjuri Devi.
Binodini Devi got her formal education at Pine Mount School in Shillong. She also received education in St Mary’s College, Shillong, Vidya Sagar College, West Bengal. She studied arts at Viswa Bharti University in Shantiniketan.
She became the first female graduate in Manipur. She was married to Dr L Nanda Babu Roy. With Roy she had two sons. Binodini Devi died on January 17, 2011 at the age of 89.

Binodini Devi wrote in Manipuri language. The work of the celebrated writer is noted for modernity rooted in Manipur’s traditions. She wrote about strong unconventional female characters in her works. She wrote 16 essays on Manipur’s culture.
She wrote under the single name Binodini. Some of her essays were published in Manipuri new spares which include the series of “Maharaja Churachandgi Imung” and a series of portraits called “Yaiskul Yai” etc. In her last book “Maharaja Churachandgi Imung” she recalls her life with her father. It is a collection of 34 essays.
Being a member of the erstwhile royal family of Manipur she lovingly recalled her life in the palace in a series of essays and plays. When she was a student of the tenth grade she made an attempt to publish her first short story “Imaton”.
In the very story she wrote on the unconventional theme of the relationship between a man and his step mother. She used to write short stories during her days in St Mary’s College.

Her first published story appeared in a Calcutta-based Manipuri journal namely “Nung’gairakta Chandramukhi” in the early 1960s. Her novel “Boro Saheb Ongbi Sanatombi” was published in 1979. She received Sahitya Akademi Award for the novel. In 2004 was published a collection of her travel essays called “O Mexico!”.
She has also translated into Manipuri the works of Bengali writers such as Rabindranath Tagore and Badal Sarkar.  She also contributed in spreading environmental awareness in Manipur with her essay “Thoibidu Warou’houee”.

Binodini Devi was influenced by the writings of Bengali literature of Saratchandra Chatterjee, Bankimchandra Chatterjee, Rabindranath Tagore and Michael Madhusudan Dutt when she was in Bengal during the years of the World War II.

She has written scripts for eight feature films and four documentaries. She wrote scripts in collaboration with film director Aribam Syam Sharma.  These films have garnered international acclaim at several screenings, including in New York, Cannes, London and Toronto film festivals.
Their film “Imagi Ningthem” had put North east India on the map of the world Cinema. Dubbed as “The Surprise of Filmotsav” it was acclaimed by the International film community as a masterpiece.
The film was the first Indian film to receive the Grand Prix at the festival des Three continents, Nantes. Their documentary “Sangai: Dancing Deer of Manipur”, was declared the “outstanding film of the year” by British Film Institute at London Film Festival in 1989.
Their film “The Chosen One” was screened in the Un Certain regard section at the 1991 Cannes film festival. Their film “Rajarshi Bhagyachandra” was screened at the 2007 International Film Festival of India. Her Manipuri dance ballet script with an environmental message includes “Keibul Lamjao”, “Loktak Isei”.

As a lyricist Binodini Devi has written more than 50 song lyrics. As a play writer Binodini Devi has written more than 40 radio plays.Binodini Devi’s vocal renditions of Rabindra Sangeet have been aired on All India Radio. Binodini Devi was also an accomplished sculptor. She was the muse of the Indian sculptor and painter Ramkinkar Vaij.
Her portraits are in the National Gallery of Modern Art in New Delhi. Binodini Devi is the founder member of “Roop Rang ”. It is Manipur’s association of writers, ports, dancers, musicians and dramatists since 1960. She was the first secretary of the Jawaharlal Nehru Manipur Dance Academy.
She pioneered in the incorporation of martial arts into the cannon of classical  Manipuri dance. She has hold elected office as a member of the Legislative Assembly of Manipur. She founded micro-financing for women in Manipur with the formation of Manipur’s first women’s cooperative bank in 1973.

Binodini Devi received  Sahitya Akademi Award for her novel “Boro Sahib Ongbi Sanatombi” In 1979. In 2007 the Sahitya Akademi selected her for their Eminent Senior Writer Award. In 1976 she was awarded the Padmashree for her contribution to Indian music, drama, dance, film and literature.
The Manipuri Sahitya Parishad awarded her the Jamini Sunder Guha Gold Medal in 1966. A film made by Aribam Syam Sharma in 1980 on her story Image Ningthem is one of India’s most awarded films in the past three decades.
14253