Nirad C. Chaudhuri (1897-1999) is considered to be one of the finest writers of English in the twentieth century. His contribution to the literary field is highly appreciated.
The list of eminent English writers would be incomplete without him. Chaudhuri's writings were influenced by Sanskrit and the older version of Bengali, Shadhubhasha. 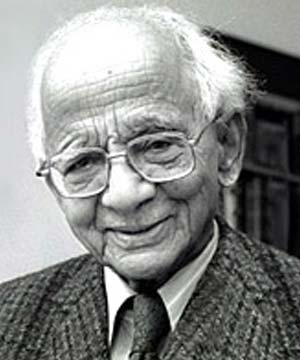 Nirad C. Chaudhuri was born on 23rd November, 1897 in Kishoreganj, presently situated in Bangladesh. He was married to writer; Amiya Dhar in 1932. They had three sons. His wife later died in 1994 at Oxford in England.
Chaudhuri was first educated at Kishorganj and Kolkata and later attended the Ripon College at Kolkata. He completed his graduation in history from the prestigious Scottish Church College at Kolkata. He worked as a clerk in the Accounting Department of the Indian Army.
It was because of his passion for writing that he started writing articles for magazines. His first published article was ‘Bharat Chandra’ which appeared in Modern Review, an English magazine.
Later as a journalist and an editor, Chaudhuri wrote for magazines like Modern Review, Probasi and Sonibarer Chithi. He also founded two Bengali magazines titled as Samasamayik and Notun Patnika.

In 1938 he worked as a secretary to Sarat Chandra Bose, a political leader of the Indian National movement. This gave him the opportunity to interact with some of the important members of the national movement like Mahatma Gandhi, Pandit Jawaharlal Nehru and Subhas Chandra Bose.
Besides writing for magazines and an s an editor, Chaudhuri also worked as a writer of commentaries for All India Radio, Kolkata Branch. He later started working for the Delhi Branch in 1941.
At the age of fifty- seven he moved to Oxford in 1970 and settled there permanently. Nirad C.Chaudhuri breathed his last in the year 1999, two months before his 102nd birthday.

Nirad C. Chaudhuri is one of the oldest writers whose contribution to the literary field is highly appreciated. Without him, the list remains incomplete. His writings to a great extent are influenced by Sanskrit and the older version of Bengali, Shadhubhasha.
His first English work, The Autobiography of an Unknown Indian was published in 1951 at the age of fifty three and considered as a masterpiece. He also wrote other books like A Passage to England (1959), Scholar Extraordinary, The Life of Max Muller(1974), The Continent of Circe (1965)
To Live or Not to Live (1971), Thy Hand, Great Anarch! (1987)  which was a sequel to his autobiography. His last published book was Three Horsemen of the New Apocalypse (1997) at the age of 100.
Some of his pre- published essays were compiled as a collection and published under titles such as The East is East and West is West, From the Archives of a Centenarian, Why I Mourn for England. He also wrote books in Bengali like Bangali Jibane Ramani, Atmaghati Bangali, Amar Debottar Sampatti.

For his contribution in the field of literature, Nirad C.Chaudhuri has been awarded with several awards. For his biography on Max Muller titled Scholar Extraordinary, The Life of Max Muller, he has been awarded the Sahitya Akademi Award in 1975.
He has also been honored with Honorary degree of Doctor of Letters by Oxford University. In 1992, he has been honored by Queen Elizabeth II with the title of Commander of Order of the British Empire.
Chaudhuri is the first and only Indian to be awarded with the prestigious Duff Cooper Memorial Award for his book, The Continent of Circe (1965).
7687