Munshi Premchand (1880 –1936) is regarded as one of the key literary figures in the category of Hindi-Urdu literature of the twentieth century.
He was the first writer of Hindi to introduce the theme of realism. His Godan or The Gift of a Cow is considered to be one his finest works and that of Hindi literature till date. 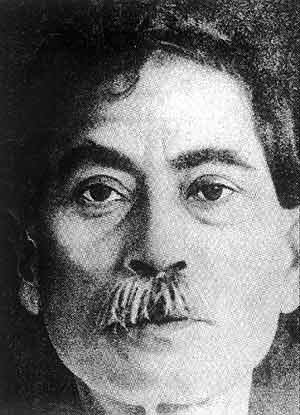 Premchand was born on 31st July, 1880 in Lamhi, a small village situated near Benaras, Uttar Pradesh. His father, Ajaib Lal was a post office clerk and his mother was Anand Devi.
His grandfather, Gur Sahai Lal was a village accountant. Premchand was the youngest child and he had three elder sisters. His mother died of prolonged illness when Premchand was eight years old.
After that he was looked after by his grandmother. His father later re-married but Premchand was not treated well by his step-mother. His father died in 1897. Premchand got married at the age of fifteen in 1895 but the marriage did not last long.
He again married for the second time with a woman named Shivarani Devi, a child-widow in 1906.This act of marrying a child widow made him face much opposition in the conservative society.
Shivarani Devi later wrote a book in the fond memory of her husband titled Premchand Gharmein. The name of his two sons is Sripat Rai and Amrit Rai. Premchand died on 8th October in 1936.


Education and career of Premchand

Premchand began his education at the age of seven, when he was admitted to a Madrasa in Lalpur where he learnt Urdu and Persian. Later he enrolled himself at the Queen’s College at Benaras and also learnt English at a Missionary school.
Being very fond of reading and writing, he read several books to enrich himself. Books provided him the ‘food and water’ for his hunger for knowledge and also a solace to turn to. In 1919 he obtained a Bachelors degree from Allahabad.
Premchand did a number of different jobs such as tutoring an advocate’s son, as a teacher, as a book-seller in order to make his livelihood.
He then secured a job as an assistant teacher at the Government District School in 1900 at Bahraich. He was then transferred to the District School in Pratapgarh, a city in Uttar Pradesh.In 1931 he moved to Kanpur and was employed as a teacher in the Marwari College.

His original name being Dhanpat Rai, Premchand first began writing under the pseudonym, Nawab Rai. Later on he changed his name to Premchand after his short story collection titled Soz-e-Watan was banned by the British in 1907.
He began his career as a writer as a freelancer in Urdu. He has written several short stories in Urdu and Hindi. In 1923 Premchand established a printing press and a publishing house titled ‘Saraswati Press’. Prermchand was also elected as the first President of the Progressive Writers’ Association in Lucknow in 1936.

Premchand used his writing skills in order to highlight the social problems and to create awareness. Some of the themes which his works deal with are widow remarriage, dowry system, issues of urban and rural societies, theme of patriotism and nationalism among others.
Some of his novels which have been well accepted are Sevasadan, Rangamanch, Gaban, Nirmala, Godan. Two of his books titled Sadgati and Shatranj Ke Khiladi have been made into films by noted film maker Satyajit Ray.  Sevasadan published in 1919, was originally written in Urdu titled Bazaar-e-Husn.
It was published in Hindi by a Calcutta based publisher.Rangabhumi was published in 1924, Pratigya(1927) deals with the issue of widow remarriage. Nirmala(1925) deals with the dowry system and it was first serialized in the magazine titled, Chand. Godan or The Gift of a Cow was published in 1936.
It is considered to be one his finest work till date. Premchand has published several articles and stories in a magazine titled Zamana which was edited by Daya Narain Nigam. Duniya Ka Sabse Anmol Ratan, a short story appeared in this magazine in 1907.

His second short novel titled Hamkhuma-o-Hamsavab published in 1907 explores the issue of widow remarriage.It was penned under the name as Babu Nawab Rai Banarsi. In the same year another short story titled Kishna was published by the Medical Hall Press of Benaras. Premchand was the first writer of Hindi to introduce the theme of realism.
He started writing in Hindi in the year 1914, when he was a much popular figure for his writings in Urdu. His first Hindi story titled Saut was published in the magazine, Saraswati in 1915.
Premchand’s last published work was titled Cricket Match which appeared in the magazine, Zamana after his death. He was also the editor of the Maryada magazine, Karmabhumi in 1932 and the Madhuri magazine.
His literary-political weekly magazine, Hans was published in March,1930.  He also used his skill as a script writer for the film industry. He wrote a script for the film titled Mazdoor. Besides this, he also translated some of the works of famous writers into Hindi such as Leo Tolstoy, Charles Dickens, Oscar Wilde, John Galsworthy among others.

Premchand also wrote essays like Kuchh Vichar, Dalam Tyag aur Talwar and plays like Karbala and Tazurba. He also wrote books for children like Ram Charcha, Jangal ki Kahaniyan, Manmohak and so on. His writings have been translated into many Indian languages and also foreign languages like Russian and Chinese.
Premchand was immensely influenced by the Indian National Congress leader, Gopal Krishna Gokhale but later shifted his attention to Bal Gangadhar Tilak. He was also inspired by the teachings of Mahatma Gandhi and Swami Vivekananda.
5194