R K Narayan (1906-2001) was a popular Indian novelist and short story writer. He was a writer of novels, essays and short stories and is credited with bringing Indian writing to the rest of the world.
Regarded as one of India's greatest writers of the twentieth century, Narayan was best known for his works set in the fictional South Indian town of Malgudi.  Narayan was one of three leading figures of early Indian literature in English alongside Mulk Raj Anand and Raja Rao. 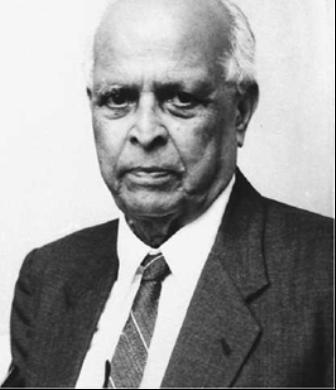 R K Narayan was born as Rasipuram Krishnaswami Iyer Narayanaswami in Madras. He spent part of his childhood under the care of his maternal grandmother Parvati as his father’s job required frequent transfers.
Narayan studied at a succession of schools in Madras including the Lutheran Mission School in Purasawalkam, CRC High School and the Christian College High School. Narayan moved to Mysore to live with his family when his father was transferred to the Maharajah's College High School.
later joined Maharaja College of Mysore. In 1930, Narayan wrote his first novel, Swami and Friends. Narayan was married to Rajam after whose death, Narayan was deeply distressed.
Narayan broke through with the help of his mentor and friend Graham Greene who was instrumental in getting publishers for Narayan’s four books including “Swami and Friends”, “The Bachelor of Arts” and “The English Teacher”. He died on 13 May 2001 in Chennai at the age of 94.

R K Narayan was a writer of the masses. His writing style was simple which would be intelligible by all and had a natural element of humour. His writings would focus on the ordinary people about their ordinary and mundane life.
Such was the writing style of the celebrated writer that the readers would instantly relate to the writings. Critics would consider Narayan to be the Indian Chekhov due to the simplicity, the gentle beauty and humour in tragic situations in writings.
While some would compare Narayan's writing style to that of William Faulkner since both their works brought out the humour and energy of ordinary life while displaying compassionate humanism.
The setting and plot of most of Narayan's stories was the fictional town of Malgudi which was first introduced in “Swami and Friends”.  His fictional town stood for reality thereby bringing about humour and energy of ordinary life.
Narayan’s narratives highlight social context and provide a feel for his characters through everyday life. Some of the works of the literary genius include  “Swami and Friends”, “The Bachelor of Arts”, “The English Teacher” “The Financial Expert” which is hailed as one of the most original works, “Guide”, the Sahitya Academy winner, “The Dark Room”, his evergreen collection of short stories “Malgudi Days”, "Mr Sampath, "Waiting for the Mahatma", "Next Sunday", "My Dateless Diary", "The Man-Eater of Malgudi",  " Gods, Demons and Others",  " The Vendor of Sweets", " A Horse and Two Goats", "The Ramayana", "The  Mahabharata", " Under the Banyan Tree and Other Stories" and many others.

Narayan won many awards during the course of his literary career. In 1958 he was awarded the Sahitya Akademi Award for “The Guide”. Guide was also made into a film of the same name and he also received the Filmfare Award for the best story. He received the Padma Bhushan in 1964.
In 1980 he was awarded the AC Benson Medal by the (British) Royal Society of Literature. In 1982 he was elected an honorary member of the American Academy of Arts and Letters. The celebrated writer was also nominated for the Nobel Prize in Literature multiple times but never won the honour.
He was nominated to the upper house of the Indian Parliament for a six-year term starting in 1989 for his contributions to Indian literature. In 2001 he was awarded India's second-highest civilian honour the Padma Vibhushan.
9791