Raja Rao (1908 – 2006) was an Indian-American writer. His writings were composed of  English language. He was one of the older Indian writers in English whose works like Kanthapura have been readily accepted and gained much popular among the readers. 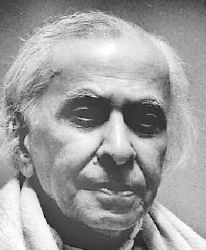 Born to well-known Brahmin family, Raja Rao was born on 8th November, 1908 in Hasan, Mysore. He was the eldest child among his siblings. His father was a teacher at Nizam College teaching Kannada.
The death of his mother at an early age of four and his grandfather left a great impression in his growing years. Raja Rao’s first wife was Camille Mouldy in 1931.
He later married for the second time Katherine Jones, an American stage actress. He later married for the third time to Susan, who was a student whom he met at the University of Texas in the 1970s.

Raja Rao began his formal education at Muslim schools, the Madarsa-e-Aliya at Hyderabad and the famous Aligarh Muslim University where he mastered French. He completed his matriculation in 1927 and graduated in subjects both English and History from the University of Madras.
He then won the Asiatic Scholarship of the Government of Hyderabad to study abroad in 1929. Raja Rao enrolled himself at the University of Montpellier, France learning all about French language and literature. He then fully explored the Indian influence on Irish literature at the Sorbonne in Paris.
Raja Rao served as a Professor of Philosophy at the University of Texas, Austin from 1966 to 1983. He taught courses like Marxism to Gandhism, Mahayana Buddhism, Indian philosophy: The Upanishads, Indian philosophy: The Metaphysical Basics of the Male and Female Principle. Raja Rao breathed his last on 8th July,2006 at Texas at the age of ninety-seven.

Raja Rao edited with Iqbal Singh an anthology of modern Indian thought from Ram Mohan Roy to Pandit Jawaharlal Nehru titled Changing India. In 1943-44 he co-edited a journal, Tomorrow with his friend, Ahmed Ali. He was associated with Chetana which is a cultural society for the propagation of Indian thought and values.

In 1931-32 Raja Rao had contributed four articles in Kannada for a journal, Jaya Kannada. His active participation in the Indian nationalist movement is reflected in his first two works such as Kanthapura (1938) and The Cow of the Barricades (1947).
In 1988 he published a biography on Mahatma Gandhi titled Great Indian Way: A Life of Mahatma Gandhi. His work was The Serpent and the Rope which dramatizes the relationships between Indian and the western culture.
Apart from the above mentioned some of his other works include Cat and Shakespeare (1965), The Policeman and the Rose (1978), The Chessmaster and His Moves 91988), On the Ganga Ghat (1989).