Jyoti Prasad Agarwala was a poet, writer, composer, dramatist, freedom fighter and filmmaker of Assam. He is called the Roopkonwar of Assam and Assamese society. Agarwala ushered modernism into Assamese art, literature and music. The collection of the songs of Roopkonwar is called Jyoti Sangeet.
Roopkonwar is also the father of Assamese films. He produced and directed the first Assamese film “Jaymati” in 1935. The death anniversary of the great son of Assam is observed as “silpi diwas” in Assam. 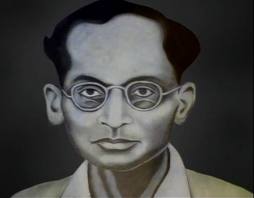 Jyoti Prasad Agarwala was born on 17 June, 1903 in Tamulbari Tea Estate of Dibrugarh Assam. He was born to Paramananda and Kiranmoyee Agarwala. Nabrangram Agarwala, forefather of Rupkonwar, came from Rajasthan and settled in Assam in 1811. Roopkonwar is the nephew of cultural icon Chandra Kumar Agarwala. Agarwala belonging to the Marwari community made Assam his home.  Roopkonwar was married to Devajaini Bhuyan in 1936. His wife supported Rupkonwar throughout his life.

Agarwala completed his matriculation from Tezpur Government High School. He joined India’s freedom movement during his school time itself. He completed his IA from National College of Calcutta. Roopkonwar did his graduation from Edinburg University, Britain. He had joined MA classes; however, he did not complete it and went to Germany to study films. Agarwala spent seven months at UFA studio Germany for learning film making. Coming to India Rupkonwar dedicated himself as an independent warrior. He was imprisonment for 15 months. Roopkonwar was involved in several activities during the freedom movement. In 1921 Roopkonwar joined the Non Cooperation movement. In 1941 he joined the Volunteer Group of Congress. In the Congress he provided selfless services. He also became the leader of the Congress.  Roopkonwar died of cancer at the age of 48 years. He took his last breath on January 17, 1951 at Tamulbari Tea estate of Dibrugarh, the place of his birth. The death anniversary of the great son of Assam is observed as “silpi diwas”. It is a state holiday in Assam.

Roopkonwar is an Assamese cultural icon. He made immense contribution towards the literary aspect of Assam. He started writing since the age of 14 years. He wrote the drama “Sonit Kunwari” at the age of 14 years. At this time he also wrote several short stories which included many short stories for children.
The plays written by him include “Rupalim”, “Karengar Ligiri”, “Lobhita”, “Nimati Konya”, “Sonpakhilee”, “Khanikar”, and “Lobhita”, “Kanaklata”etc. Rupkonwar’s plays are acted on stage. He made contribution to children’s literature also. His collected work is called “Jyotiprasad Rachnavali”. The “Rachnavali” also contains some English writings.

Roopkonwar wrote more than 300 songs. He also gave music to most of the songs. The collection of his songs is called Jyoti Sangeet. Jyoti Sangeet became a new genre of music in Assam. During the Independence movement he wrote various patriotic songs including “kanaklata”, “Axomia Lorar Ukti” etc. Many of his songs for children include “Jyoti Ramayana”, “Kushour Xapun” etc. Some of the popular Jyoti Sangeet is “Luitore Paani Jaabi o’ Boi”, “Amaare Xokhiyaai”, “Gase Gase Paati Dile”, etc. His famous poems include “Jyoti Raamaayon”, “Luitor Paaror Agnixur”.

Roopkonwar is the father of Assamese films. The origin of Assumes films can be traced back to the imagination of this great son of Assam. He produced and directed the first Assamese film “Jaymati” in 1935. The film was cinematized from Lakshminath Bezbaroa’s play “Jaymati Kunwari”. Due to lack of technical assistance Jyoti Prasad had to shoulder the added responsibilities as script writer, choreographer, editor, set and costume designer, lyricist and music director. Roopkonwar invested immense money into the film. The movie was released in 1935. Jyoti Prashad set up a studio “Chitraban” in Bholaguri Tea estate in Tezpur in 1934. He made the film in the studio. The film had, however, failed miserably.  In 1939 the second Assamese film “Indramalati” was released. Padma Vibhushan Bhupen Hazarika played the role of a stellar in the film. In 1937 he built a cinema hall “Junaki” in Tezpur. He also produced the record play of “Jaymati” and “Sonit Kunwari”.

Roopkonwar is credited with the publication of the newspaper “Axomiya” in 1944. He also established an Assamese Music school in Tezpur. In honour for his contributions to the cultural aspects of Assam the Government of Assam issued a commemorative stamp of Agarwala in 2004.