Sarala Devi Chaudhurani (1872-1945) was a writer, social worker and nationalist from West Bengal. She was the founder of the Bharat Stree Mahamandal in Allahabad in 1910.
She was the first woman political leader from Bengal in the Indian independence struggle. She was an eminent feminist, journalist and a prolific writer. 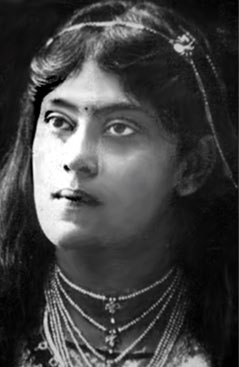 Sarala Devi Chaudhurani was born on September 9, 1872 at Calcutta in West Bengal. She was born to Janakinath Ghoshal, and Swarnakumari Devi. Swarnakumari Devi was the elder sister of Rabindranath Tagore.
Her father was one of the earliest secretaries of the Bengal Congress and her mother was the first successful women novelist of Bengali literature. She had been brought up in an intellectual background. She passed her University entrance exam in 1886.
She passed her BA examination in English literature from Calcutta University in 1890 and received the Padmavati Gold Medal. She was one of the few women graduates of her time.
She was proficient in French, Sanskrit and Persian. Since childhood she was interested in literature, arts and music. She was married to Rambhuj Dutt Chaudhuri in 1905.
Their son Deepak Dutt married the granddaughter of Mahatma Gandhi Radha. She died on August 18, 1945 at the age of 72.

Sarala Devi was the founder of the Bharat Stree Mahamandal in Allahabad in 1910. It was first women’s organization in India. One of the important goals of the organization was to promote female education not much recognized at that time.
The improvement of the situation of women all over India was the primary concern of the leaders of the organization. The organization developed several offices in Lahore, Allahabad, Delhi, Karachi, Amritsar, Hyderabad, Kanpur and Kolkata and so forth.


She was the first woman political leader from Bengal in the Indian independence struggle. She was involved in variety of ways in the freedom movement.
She took active part in the Swadeshi movement and propagated the use of hand woven textiles. She sang the “Vande Martaram” at the Banaras Congress Session despite the ban on its singing by the British government. Sarala Devi was an eminent feminist.
She was a promoter of the female education. It is to be noted that the concept of female education was not much developed at that time.
She worked for the uplift of the female of the country. Se founded the Bharat Stri Shiksa Sadan, a school for girls in Calcutta. She also worked for women’s education in the villages around Lahore.


Sarala Devi was a prolific writer. She edited a number of journals. She edited the journal “Hindustan” and launched its English edition. Among her important publications are Nababarsher Svapna, Jibaner Jharapata, Banalir Pitradhan and Bharat Stri Mahamandal.
She composed many poetic songs which were later included in her book “Satagan”, literally a hundred songs. Among these songs “Hindustan” and “Namo Bharata Janani” are unique in beauty and passion.
14129