One of the most popular novelists and short story writers of all times, Sarat Chandra Chattopadhyay  (1876-1938) was a prolific writer of India.
His writing was based on realism, cause of the womenfolk, turbulence in the society and against superstition and social oppression. Chattopadhyay's writing captured the hearts and minds of people in Bengal and India. 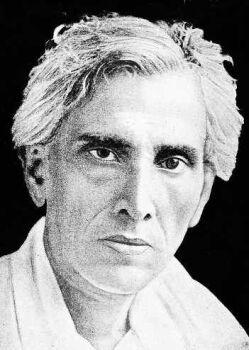 Sarat Chandra Chattopadhyay was born at Devanandapur in Hoogly district of West Bengal in 1876. He was born to Motilal Chattopadhyay and Bhubanmohini. Born into a poor family his childhood and youth were spent in dire poverty.
He spent most of his life in Hoogly and Bhagalpur. He went to Burma for a short period and later settled in West Bengal. Sarat Chandra received very meager education. He was educated at Pyari Pandit’s Pathshala then at Hoogly Branch high School.
Chattopadhyay was imaginative and had profound interest in literature since his youth.  He started writing in his early teens. Sarat Chandra died of liver cancer in 1938 at Kolkata.

The writings of Sarat Chandra were based on rural Bengali society. His writing also bore his opposition to superstition and social oppression.
He wrote for the cause of the womenfolk. Much of his writings bear the testimony of the turbulence in the society. Some of his writings were based on his experience in Bhagalpur where he stayed for 20 years.
Sarat Chandra Chattopadhyay was one of the most popular writers of novels and short stories. Some of his notable works include Mandir, Palli Samaj, Srikanta, Griha Daha, Ses Prasna, Sesher Parichay,  Pather Dabi, Bordidi, Bindur Chhele, Parinata, Biraj Bou, Ramer Shumoti, Devdas, Choritrohin, Datta, Dhare Alo, Swami, Aalo o Chhaya, Nishkriti, Pandit Mashay etc.
The works of Sarat Chandra have been translated into many Indian languages. Most of his works have been dramatized on stage also. Sarat Chandra’s works have been made into 50 films. His novel Devdas has been made into 8 versions.
Films made on his writings are Parineeta, Majli Didi, Datta, Swami, Bindur Chhele into Chhoti Bahu, Nishkriti into Apne Paraye, Pandit Mashay into Khushboo, Aalo o Chhaya into Aalo Chhaya. Vishnu Prabhakar wrote the biography of Sarat Chandra Chattopadhyay.
Sarat Chandra Chattopadhyay received the Kuntolin Puraskar for Mandir. Sarat Mela, started in 1972, is held every year in West Bengal portraying the lifetime and works of Sarat Chandra.
5410