Shashi Despande (1938- Present) is one of the popular women writers in India. She is known for her novels "That Long Silence" and "The Dark Holds No Terror".
Her novels deal with women belonging to Indian middle class. Despande's novels present a social world of relationship. 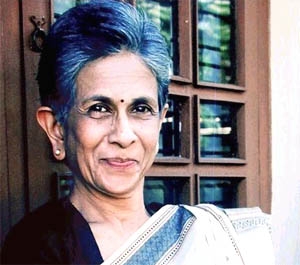 One of the popular women writers, Shashi Deshpande was born in 1938 in Dharwad district in Karnataka. She was born to famous Kannada dramatist and writer Sriranga.
She did her education from Bombay and Bangalore in Education and Law. She also pursued a course in Journalism at the Bharatiya Vidya Bhawan in Bombay and also worked for some time as a journalist for Onlooker, a popular magazine.

Shashi Despande's novels deal with women belonging to Indian middle class. Her novels deal with the inner world of Indian women. Shashi Despande's novels presents a social world of relationship. In her novels one will find women in search of self and the relationships central to them.
In her career as a writer, she has so far written about four books for children, a number of short stories and nine novels. Her essays are published in a volume entitled Writing from the Margin and Other Essays.

Shashi published her first collection of short stories in 1978 and her first novel titled The Dark Holds No Terror in 1980.
The list of her works include If I Die Today, Come Up and Be Dead, That Long Silence, The Intrusion and Other Stories(1993) and others. The names of her children’s books are as follows- A Summer Adventure, The Hidden Treasure, The Only Witness and The Narayanpur Incident.