Srimanta Sankardeva (1449- 1568) was a 15th - 16th century Assamese saint-scholar, playwright and social religious reformer. The ‘Mahapuruxiya Dharma’ started by him was part of the Bhakti movement. Considered ‘Mahapurush’ or a great man, his literary and artistic contributions are living traditions in Assam today. 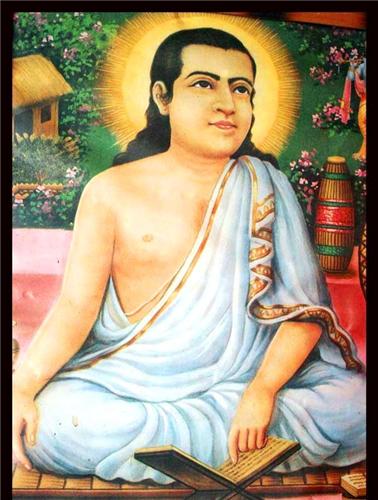 Srimanta Sankardeva was born near Bordowa in Nagaon district in 1449. He was born to Kusumvara and Satyasandhya Devi into the Baro-Bhuyans family. They belonged to the ‘Kayastha’ Hindu caste. His parents were ‘Saktas’.
He lost them at a tender age and was raised by his grandmother. Srimanta Sankardeva attended the ‘Tol’ or ‘Chatrasaal’ school of renowned scholar Mahendra Kandali at the age of 12. He left the ‘tol’ in his teens to attend his responsibilities as the Shiromani Bhuyan.
The Mahapurush married Suryavati, his first wife, at his 20s. With Suryavati Shankardeva had a daughter namely Manu. After he married her off, Shankardeva left for a pilgrimage. During the religious tour the Saint went to Puri, Mathura, Dwarka, Vrindavan, Gaya, and almost all the major seats of Vaishnavite religion in India.
During his pilgrimage he was witness to the Bhakti movement in full bloom in India. The Saint married Kalandi at the age of 44 for the second time. Shankardeva had moved from place to place preaching his religion. His son Ramananda was born at Gangmau.
Shankardeva met his spiritual successor Madhavdeva at Dhuwahat in Majuli. He wrote the drama ‘Patniprasada’ at Dhuwahat. Srimanta Shankardeva had the physical ability to swim across the Brahmaputra while it was in spate.
According to Ramacharan Thakur, a biographer, a painful boil appeared in the Saint’s body which led to his death. According to some others, king Naranarayan’s adamance that he be initiated into a new religion led the saint to surrender his life to the Lord by way of meditative communion. The Mahapurush died at the age of 120 years in 1568.

Srimanta Sankardeva’s first verses were “kartala kamala kamaladala nayana. Bhavadava dahana gahana vana xayana”. The entire poem was written by the genius before he was taught the vowels. It is cited as an example of the early flowering of his poetic genius. At Badrikashrama he composed his first ‘borgeet’ “mana meri ram charanahi lagu” in Brajavali.
He produced a dance drama called “Cihna Yatra” for which he painted the ‘Sapta Vaikuntha’. He played the instruments for the drama himself. At Bordowa he constructed his first ‘namghar’.
At this place he started preaching. Shankardeva had rendered the eight books of the “Bhagavata Purana” into Assamese including the “Adi Dasama”, “Harishchandra-Upakhyana”, “Bhakti Pradeep”, “Bhakti Ratnakara”, “Anadi-Patana”. At Patbausi near Barpeta he constructed a ‘Kirtanghar’.
He translated the first book of the ‘Ramanaya’ (Adi Kanda). At Bordowa he constructed a ‘dharmagraha’ where he installed the image of lord Vishnu. Shankardeva’s magnum opus is ‘Kirtan Ghosha’. It contains narrative glorifying lord Krishna meant for community singing.
It is a ‘Bhakti kavya’ par excellence. Shankardeva wrote ‘Keligopala’, ‘Kalidamana’, “Bhakti Pradipa”, “Rukmini Harana”, ‘Ajamilopokhyana’, ‘Bali Chalana’, ‘Amrata-manthana’, ‘Kamajaya’, ‘Gunamala’ etc.

Shankardeva was against any kind of idol or image worshipping. According to Shankardeva a single God could be worshipped solely by uttering His various names. The form of lord Krishna was used by Shankardeva to preach devotion.
In contrast to other Bhakti forms the Ek Sarana Dharma follows the ‘dasya’ attitude that is “slave to God”. In the name of God Hari, Ram, Narayana and Krishna are uttered.
The religion is antagonistic to Shaktism. Therefore, Radha is not worshipped with Krishna in the dharma. Shankardeva started a system of ‘initiation’ (saran lowa) into his religion.
People practicing his religion are called ‘Mahapurishia’, ‘sarania’ or ‘sankari’. Shankardeva was also a social reformer in the sense that he fought against the social evils like casteism.

Satras are socio-religious institutions belonging to the Mahapurixia dharma. Monks called ‘bhaktas’ live in the sattras under a satradhikar. Sattriya dance was conceived and developed by Shankardeva.
It is one of the classical dance forms of India. The famous Vrindavani Vastra is the cloth of Vrindavan. It is a 120 x 60 cubits tapestry depicting the ‘lilas’ of Lord Krishna at Vridavan through rich woven and embroidered designs on silk. The ‘vastra’ was woven in Barpeta by 12 master weavers under the saint’s supervision.
2945