Syed Abdul Malik (1919-2000) was a prominent Assamese novelist, short story writer and poet. He was an unrivaled writer in terms of statistics of fictional work.
He has contributed extensively towards the growth of Assamese literature. He was the first author to have introduced the “Chekhovian atmosphere” type stories into Assamese language. 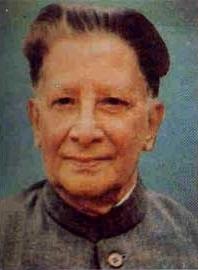 Syed Abdul Malik as born on January 15, 1919 at Naharani village in Golaghat district of Assam. He was born to Syed Rahmat Ali and Syeda Lutfun Nissa.
He started his early education at Nahoroni. At Dergaon and Jorhat he completed ME and high school phases. He completed his graduation in 1941 with English honours in Cotton College.
He joined as a civilian censor in the army in 1941. He joined as a Parsi lecturer at Jorhat College in 1946. He became a programme assistant in Guwahati-Shillong Radio Centre in 1948. In 1951 he joined as a teacher in JB College at Jorhat. He died on December 20, 2000 at the age of 81.

Abdul Malik has contributed extensibly towards the growth of Assamese literature. He took to writing at an early age. He is credited with taking wide variety of characters bringing them neatly together. In terms of statistics of fictional work he was unrivaled.
His works include 60 novels, 11 plays, five collections of poems, 5 children books, 3 travelogues and 1000 short stories.He was awarded the Sahitya Akademi Award for his most important creative work “Aghari Atmar Kahani”. Another of his most important creative work is “Surujmukhir Swapna”.

His short story “Vibhatsa Vedana” is considered the best short story ever written in any Indian language on the trauma that the partition had left on the common men. His first novel was “La Sa Gu”. It was published in a series in a monthly magazine “Bahni” in 1945-46.
“Pran Heruar Pisot” is one of his popular writings. “Bibhatsa Bedana” was a controversial writing due to its sexual overtones. In “Anneswan” the author deals with the character of a prostitute.His most significant work is “Dhanya Nara Tanu Bhaal”, a novel based on the life and times of Shankardeva, the great Vaishnava saint of Assam.

His research work on Ajan fakir, a Sufi saint of Baghdad who came to live in Assam in the 17th century has added a new dimension to the communal harmony in the state apart from giving a new lease of life to the “Zikir” and “zari” songs of Assam.
His other most popular novels are “Adharxila”, “Doctor Arunabhor Asampurna Jivani”, “Kavitar Naam Labha”, “Pran Samudra”, “Trisul”, “Dukhan Nadi aru Ekhan Marubhumi”, “Rup Tirhar yatri”, “Parasmani”, “Anjani Natun Suwali”, “Rangagara”,  “Moraha Papari”, “Dookhon Bhori” “Sikhare Sikhare”, “Ranga Gorah” etc.
During his lifetime Syed Abdul was influenced by the techniques of Anton Chekhov and Guy de Maupassant. A widely travelled person, Malik’s travelohuguies on Russia, England, China and the Middle East are considered some of the best such works in the Assamese language.
His works have been translated into almost all major Indian languages. Several of his short stories and novels have been made into films. Abdul Malik was the member of the Rajya Sabha for one term (1983). He was one of the members of the Asom Sahitya Sabha. He was associated with many literary societies.
He was a professor of the Assamese language and literature for 40 years. He was popularly called “Malik Sir” for his long innings as professor of Assamese.